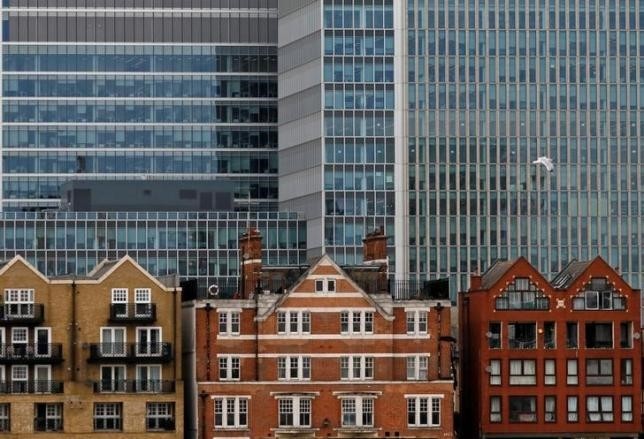 Apartment buildings are backdropped by skyscrapers of banks at Canary Wharf in London, Britain October 30, 2015. (REUTERS Photo)
by Compiled from Wire Services Jul 06, 2016 12:00 am

Three more UK property funds have suspended trading, preventing investors from getting their money back and joining a trend that has prompted a rise in calls from savers to the financial services complaints body.

The funds pulled down the shutters after a wave of investors asked for their money back amid speculation about a drop in UK commercial property prices following the country's vote to leave the European Union on June 23.

Henderson Global Investors, part of Henderson Group , said on Wednesday it had temporarily suspended trading in its 3.9 billion pound ($5 billion) UK Property PAIF and PAIF feeder funds due to "exceptional liquidity pressures" given uncertainty after the "Brexit" vote and the other suspensions.

It was followed within the hour by Columbia Threadneedle, part of the Ameriprise Group, which said it had suspended trading in its Threadneedle UK Property Fund.

Canada Life said in a note to investors seen by Reuters that it had also suspended its Canlife Property and Canlife UK property funds.

In response to the rash of suspensions, Britain's Financial Ombudsman Service said it had begun to receive calls from concerned retail investors worried about the closures and the potential hit to their savings.

"It is certainly too early for formal complaints about this issue, however, we have begun to see initial enquiries come through from concerned consumers," a spokeswoman said.

"This is something that is very much on our radar. Although the decision to suspend redemptions was expected, the extent of the suspensions by the three funds so far is quite troubling."

Property funds can find it particularly difficult to cope with a rush of redemptions as it can take time to sell their assets in order to give investors their money back.

Policymakers rushed on Tuesday to emphasise that the seize-up was confined to the sector of "open-ended" funds in real estate that normally allow investors to exit at will, and did not signal a liquidity problem in wider financial markets.

However other shares and funds in the commercial property sector also faced a sharp sell-off on Tuesday as the implications set in that assets could be due for a fall.

Commercial real estate has wider implications for the financial system because it is often used as collateral by companies that borrow from banks.

The three suspended funds collectively account for nearly a third of the 35 billion pounds ($46 billion) in open-ended British commercial property funds, which the Bank of England had flagged as a major risk ahead of the June 23 vote.

The 4.4 billion pound Property Portfolio run by M&G Investments, the fund arm of insurer Prudential, was the latest to go on Tuesday afternoon after a run on the fund from investors seeking to take their money out.

The M&G fund owns 182 properties including the New Square Bedfont Lakes office park near Heathrow Airport, while Aviva's owns the Omni Leisure Centre in Edinburgh, among others. The Standard Life fund, meanwhile, owned 124 properties at the end of May including Monument Mall in Newcastle.

While open-ended funds tend to hold a pile of cash or similar assets to manage redemptions, in a worst case scenario they could turn into forced sellers of buildings in a falling market as more investors seek to redeem. Suspending trading is a measure designed to prevent that from happening.

The head of Britain's financial markets regulator, Andrew Bailey, said on Tuesday the Standard Life move showed the liquidity mismatch needed to be addressed and that he was in "very close touch" with investment funds over the issue.

"It does point to issues that we need to look at in the design of these things, because it comes back to my fundamental point about holding illiquid assets in open end funds that revalue and are required to be revalued," said Bailey, CEO of the Financial Conduct Authority.

"My own feeling is ... that we will need to come back and look at those."

Other leading British property fund managers including Henderson Global Investors, the fund arm of Legal & General, Aberdeen Asset Management and Kames all said they had already cut the value of their assets to better reflect market pricing or made moves to price funds more regularly, but had yet to suspend any funds.

Columbia Threadneedle said it had yet to make any changes to its property fund but was monitoring the situation.

Bank of England Governor Mark Carney said on Tuesday that British financial markets were less vulnerable to a shock than they were at the time of the financial crisis in 2008.

Among other large holders of commercial property which could be hit if the market jitters turn into a longer-lasting sell-off are the banks, which are due to report their half-yearly results in the coming weeks.

HSBC Holdings had exposures of $26.3 billion to commercial real estate in Europe at the end of 2015, although it did not specify its exposure to the UK market. Standard Chartered, meanwhile, had no exposure to the UK.

Strong demand from investors across the globe looking for extra yield to pay pension holders during a period of low interest rates meant that liquidity was much better than during the last slump amid the financial crisis, he added.

"We're seeing a small, relatively confined lack of liquidity in the open-ended real estate funds, but if they were to put their stock to the market, I'm pretty confident they would find a lot of interested parties. Whether that's at a price they want to sell at is another matter."

Just days before Standard Life Investments suspended its fund, it had put one of the buildings in the fund - in Orange Street, central London - up for sale.

Simon Hall of surveyors Hanover Green said the price tag of 11 million pounds had not been changed as a result of the Brexit vote and there had been "very good interest" in the property.

While cash-rich foreign investors had been big buyers of UK property in recent years as a yield safe-haven amid global economic stress and had plenty more to spend, they may yet wait before investing more given the still-uncertain outlook for Britain as it negotiates its EU divorce, Benedict said.

Spooked investors sold out of a range of stocks connected to the industry on Tuesday, including property firms, listed real estate investment trusts, asset managers and insurers.

At 1457 GMT, Standard Life's listed real estate fund was down 7.4 percent, while F&C Commercial Property Trust had fallen 6.1 percent and the Schroder Real Estate Investment Trust was down 8.6 percent, albeit all off their lows.

Listed funds have a fixed number of shares which can be sold on an exchange by investors wanting their money back, and unlike open-ended funds do not have to sell assets to meet redemptions.

"When open-ended funds close the gates the market starts getting nervous," said Collette Ord, an investment trust analyst at Numis said. "The danger is if open-ended funds have to sell assets at distressed levels, that will then lead to price discovery and force listed trusts to also write down assets."

Of the ten listed property funds it tracked, Numis data on Tuesday showed the average fund was trading at a 13.1 percent discount to the value of its assets, which are typically calculated on a quarterly basis.

Concerns that weaker consumer sentiment could spread to other investments added to pressure on asset managers and insurers, which are already grappling with stubbornly high investor outflows and a dearth of investment income. Schroders was down 4.4 percent, Legal and General 6.3 percent and Standard Life itself 5 percent.

Goldman Sachs, Barclays and Credit Suisse are among major banks forecasting a recession in the UK in the second half of 2016 or early 2017 with firms holding off on hiring and capital spending as a key reason.