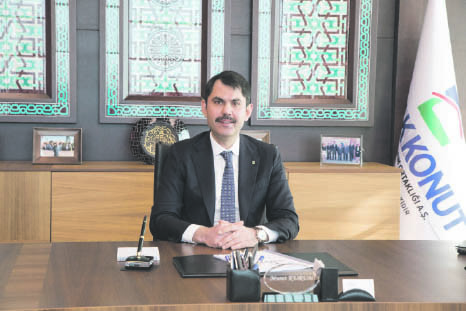 Emlak Konutu2019s General Manager Murat Kurum
by daily sabah Mar 14, 2017 12:00 am
The Emlak Konut Real Estate Investment Company, Turkey's biggest real estate investment company, is pioneering new developments for the housing industry in Turkey thanks to its latest campaigns. More than 1,520 houses worth almost TL 1.35 billion ($368 million) have been sold in the first two weeks of the joint 20-year maturity campaign, the latest campaign launched by Emlak Konut. The ongoing campaign, titled, "Time to Unite for a Strong Turkey," was initiated on Feb. 1 and will continue until March 31. According to Emlak Konut, the campaign, which has seen more than TL 1.35 billion in sales within the first 15 days, has helped housing companies achieve sales targets within a two-week period.

Last year, Emlak Konut sold 332 houses in January, 424 in February, 440 in March and 464 in April, selling a total of 1,657 houses in four months. Sales figures achieved within the first 15 days of the campaign also matched 2016's total sales figure for the first four months of that year. In a special interview with Daily Sabah, Emlak Konut's General Manager Murat Kurum shared his insights into the ongoing campaign and the sector.

Daily Sabah: How would you evaluate your campaign of 20 years installment housing sales, which came to the fore with Emlak Konut's motto, "Time to Unite for a Strong Turkey?" Could you offer insights into the details of your campaign and the motivation behind its origins?

Murat Kurum: With this campaign, we are breaking new ground in the industry by increasing the housing installments by up to 20 years in our current 30 housing projects. In fact, our goal is to offer something that has not yet been offered to the people and raise awareness. We made an effort to offer a variety of options to families from every income bracket by increasing the installments to 20 years and decreasing the installment payments. Within this scope, we pulled down the interest rate offered by banks to a more reasonable level providing monthly rate options, such as 0.79 percent for 240 months, 0.45 percent for 120 months or zero percent interest for 60 months. We made a call to decrease the interest rates in our industry with our collaboration with our contractor companies and have received positive feedback. Our campaign continued until March 31. Hence, the chance to benefit from our campaign continues. We will soon make a statement about the results of our campaign but I can say this much: our campaign is in high demand. We will bring our variety of high-potential investment housing options and projects to people with high and low incomes.

D.S.: As you may know, some recently approved regulations in the form of tax reductions are enabling foreigners to buy properties in Turkey. Moreover, according to a new amendment, foreigners who were deemed by the Environment and Urbanization Ministry to have purchased at least $1 million in immovable properties without selling them within three years of purchase will be eligible to acquire Turkish citizenship, subject to the Council of Ministers' authorization. How do you think these regulations will affect real estate sales to foreigners?

M.K.: It is common knowledge that we had a very productive year regarding foreign investor sales in 2015. Nearly 18 percent of sales we carried out as Emlak Konut were to foreign investors. However, last year, housing sales to foreign investors experienced a downturn compared to the previous year. I can confidently say that I am more optimistic about sales this year thanks to the incentives provided by the government, especially in the housing industry with value added tax (VAT) rates in 2016 and many other attractive opportunities offered to Turkish citizens as well as foreigners, such as citizenship, in 2017.

D.S.: Could you list the reasons for choosing Turkey in real estate investment?

Turkey is capable of tackling tough times and coming out stronger than ever. It should be said that economic and political stability are among the most important parameters behind Turkey's strength. Economic stability, which comes with political stability, is the priority for a foreign investor. Besides, real estate continued to be the most attractive investment tool in Turkey. The House Price Index increased by 12.12 percent as of December, 2016, compared to the same time last year. Hence, we can say that housing investment has become more attractive recently with the state incentives and housing campaigns initiated under our leadership. I recommend everybody benefit from these opportunities and make a housing investment in Turkey.

D.S.: What are your expectations for Turkey's real estate industry in 2017?

We believe that 2017 will be more active compared to 2016. The positive effect of the AT discount on cost, the citizenship rights offered to foreigners in the event of a real-estate purchases, and the reduction in bureaucratic procedures especially, and the reflections of Emlak Konut's campaigns on other companies in the industry are important. The ongoing infrastructure and superstructure projects in Turkey, especially in Istanbul, and buyer awareness of what they need, will compel construction to be more attentive and careful. We predict that 2017 will have a positive effect on our sector due to ongoing elements, such as devotion to urban transformation, the increasing population among youths and the number of young people who leave their families' homes to live independently due to work or school as well as the continuous rate of migration across Turkey.

D.S.: What is your expectation for the MIPIM fair?

MIPIM is one of the most important fairs in the industry and as Emlak Konut, we have endeavored to attend the fair regularly and also long into the future. This year, we expect the organization to be fruitful, to promote and inform potential investors on the incentives offered by our government in the housing sector and attractive opportunities born as a result of the hard work of key players in the sector. Apart from us, many other construction companies will attend the fair to promote their projects as well as the many opportunities for housing investments offered in Turkey. Within this scope, the MIPIM and similar organizations are good opportunities for carrying out advertising activities. The opportunities offered to investors in collaboration with the government and the private sector are important, and so is the need to promote all the benefits they provide successfully. Hence, I believe that the MIPIM and similar platforms should be used wisely and to their full potential.
Last Update: Mar 15, 2017 10:42 pm
RELATED TOPICS