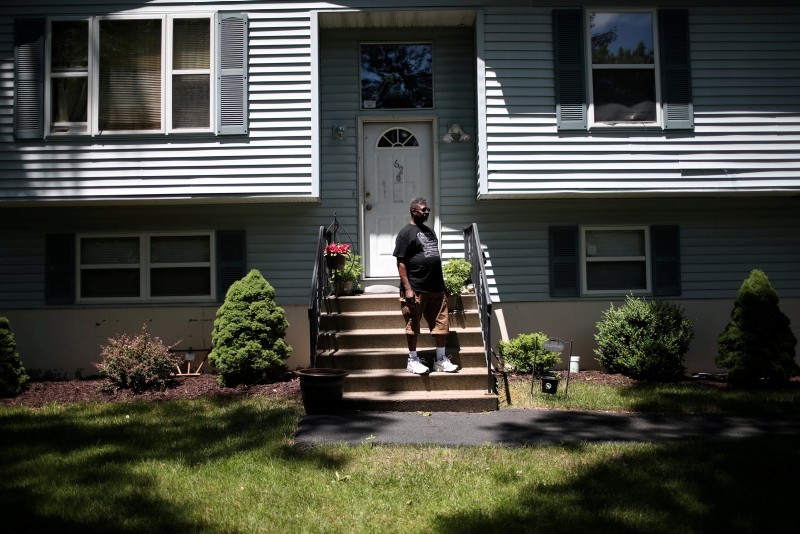 Michael Payne stands in front of his home in the Penn Estates development where most of the homeowners are underwater on their mortgages in East Stroudsburg, Pennsylvania, U.S., June 20, 2018. (Reuters Photo)
by Sep 14, 2018 12:00 am

School bus driver Michael Payne was renting an apartment on the 30th floor of a New York City high-rise, where the landlord's idea of fixing broken windows was to cover them with boards.

So when Payne and his wife Gail saw ads in the tabloids for brand-new houses in the Pennsylvania mountains for under $200,000, they saw an escape. The middle-aged couple took out a mortgage on a $168,000, four-bedroom home in a gated community with swimming pools, tennis courts and a clubhouse.

"It was going for the American Dream," Payne, now 61, said recently as he sat in his living room. "We felt rich."

Today the powder-blue split-level is worth less than half of what they paid for it 12 years ago at the peak of the nation's housing bubble.

Located about 80 miles northwest of New York City in Monroe County, Pennsylvania, their home resides in one of the sickest real estate markets in the United States, according to a Reuters analysis of data provided by a leading realty tracking firm. More than one-quarter of homeowners in Monroe County are deeply "underwater," meaning they still owe more to their lenders than their houses are worth.

The world has moved on from the global financial crisis. Hard-hit areas such as Las Vegas and the Rust Belt cities of Pittsburgh and Cleveland have seen their fortunes improve.

But the Paynes and about 5.1 million other U.S. homeowners are still living with the fallout from the real estate bust that triggered the epic downturn.

As of June 30, nearly one in 10 American homes with mortgages were "seriously" underwater, according to Irvine, California-based ATTOM Data Solutions, meaning that their market values were at least 25 percent lower than the balance remaining on their mortgages.

It is an improvement from 2012, when average prices hit bottom and properties with severe negative equity topped out at 29 percent, or 12.8 million homes. Still, it is double the rate considered healthy by real estate analysts.

"These are the housing markets that the recovery forgot," said Daren Blomquist, a senior vice president at ATTOM.

Lingering pain from the crash is deep. But it has fallen disproportionately on commuter towns and distant exurbs in the eastern half of the United States, a Reuters analysis of county real estate data shows. Among the hardest hit are bedroom communities in the Midwest, mid-Atlantic and Southeast regions, where income and job growth have been weaker than the national norm.

(See a list of the Top 10 underwater U.S. counties and Reuters' methodology at https://tmsnrt.rs/2CMQEnX).

Developments in outlying communities typically suffer in downturns. But a comeback has been harder this time around, analysts say, because the home-price run-ups were so extreme, and the economies of many of these Midwestern and Eastern metro areas have lagged those of more vibrant areas of the country.

"The markets that came roaring back are the coastal markets," said Mark Zandi, chief economist at Moody's Analytics. He said land restrictions and sales to international buyers have helped buoy demand in those areas. "In the middle of the country, you have more flat-lined economies. There's no supply constraints. All of these things have weighed on prices."

In addition to exurbs, military communities showed high concentrations of underwater homes, the Reuters analysis showed. Five of the Top 10 underwater counties are near military bases and boast large populations of active-duty soldiers and veterans.

Many of these families obtained financing through the U.S. Department of Veterans Affairs. The VA makes it easy for service members to qualify for mortgages, but goes to great lengths to prevent defaults. It is a big reason many military borrowers have held on to their negative-equity homes even as millions of civilians walked away.

A poor credit history can threaten a soldier's security clearance. And those who default risk never getting another VA loan, said Jackie Haliburton, a Veterans Service Officer in Hoke County, North Carolina, home to part of the giant Fort Bragg military installation and one of the most underwater counties in the country.

"You will keep paying, no matter what, because you want to make sure you can hang on to that benefit," Haliburton said.

These and other casualties of the real estate meltdown are easy to overlook as homes in much of the country are again fetching record prices.

But in Underwater America, homeowners face painful choices. To sell at current prices would mean accepting huge losses and laying out cash to pay off mortgage debt. Leasing these properties often won't cover the owners' monthly costs. Those who default will trash their credit scores for years to come.

Special education teacher Gail Payne noses her Toyota Rav 4 out of the driveway most workdays by 5 a.m. for the two-hour ride to her job in New York City's Bronx borough.

Now 66, she and husband Michael were counting on equity from the sale of their house to fund their retirement in Florida. For now, that remains a dream.

The Paynes' gated community of Penn Estates, in East Stroudsburg, Pennsylvania, is among scores that sprang up in Monroe County during the housing boom.

Prices looked appealing to city dwellers suffering from urban sticker shock. But newcomers didn't grasp how irrational things had become: At the peak, prices on some homes ballooned by more than 25 percent within months.

Today, homes that once fetched north of $300,000 now sell for as little as $72,000. But even at those prices, empty houses languish on the market. When the easy credit vanished, so did a huge pool of potential buyers.

Eight hundred miles to the west, in an unincorporated area of Boone County, Illinois, the Candlewick Lake Homeowners Association begins its monthly board meeting with the Pledge of Allegiance and a prayer.

Nearly 40 percent of the 9,800 homes with mortgages in this county about 80 miles northwest of Chicago are underwater, according to the ATTOM data. Some houses that went for $225,000 during the boom are now worth about $85,000, property records show.

By early 2010, unemployment topped 18 percent after a local auto assembly plant laid off hundreds of workers. At Candlewick Lake, so many people walked away from their homes that as many as a third of its houses were vacant, said Karl Johnson, chairman of the Boone County board of supervisors.

"It just got ugly, real ugly, and we are still battling to come back from it," Johnson said.

While the local job market has recovered, signs of financial strain are still evident at Candlewick Lake.

The community's roads are beat up. The entryway, meeting center and fence could all use a facelift, residents say. The lake has become a weed-choked "mess," "a cesspool," according to residents who spoke out at an association meeting earlier this year. Association manager Theresa Balk says a recent chemical treatment is helping.

Annual homeowner's dues of $1,136 are being stretched to pay for all the upkeep. But those fees may be a big deterrent for many would-be buyers at Candlewick Lake, said association board member Randy Budreau.

"A gated community like this, with our rules and fees, it may be just less attractive now to the general public," he said.