Your guide to Eid al-Adha or Feast of Sacrifice 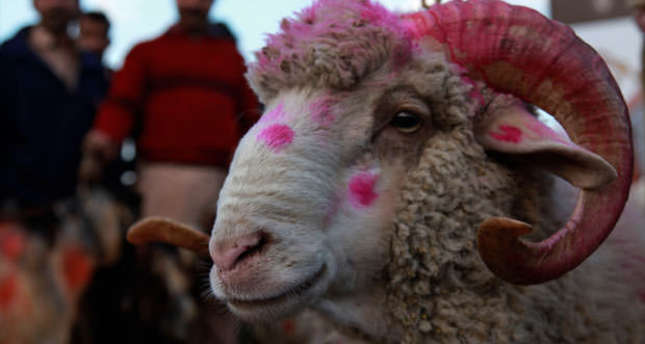 Kurban Bayramı, also known as the Feast of Sacrifice or Eid al-Adha, which begins this Saturday and lasts for a further three days, is a time for community, connecting and charity and is one of two religious festivals of the year in addition Eid al-Fitr

Kurban Bayramı is upon us as the country scrambles to prepare their homes and treats to celebrate what is the most important religious festival of the year and a time of community, family and charity. Kurban Bayramı is one of the two main religious festivals celebrated as a national holiday in Turkey and observed by Muslims all over the world. Kurban Bayramı falls around 70 days (depending on the lunar calendar) after the end of Şeker Bayramı, also known as Eid al-Fitr, which takes place at the end of Ramazan, and coincides with the end of the annual pilgrimage to Mecca. This three day holiday, which commences on Saturday with a morning prayer and sermon and comes to a close on Monday, Oct. 6, stands out of course for the tradition of sacrificing an animal and distributing the meat to those less fortunate.

The tradition of sacrificing an animal such as a sheep, goat, cow or even a camel is a commemoration of the story in the Quran of Abraham's willingness to sacrifice his own son as an act of submission to the will of God, who spared him from this task by enabling him to sacrifice a ram instead. There are similar versions of this story in both the Bible and the Torah.

The purpose of carrying out the annual sacrifice is to identify with Abraham's willingness to sacrifice everything for God and in return God's deliverance of Abraham by allowing him to sacrifice an animal instead. According to Islamic belief, every Muslim who is wealthy enough should sacrifice a farm animal on behalf of every member of his family. The meat is then divvied up in three parts with one part saved for the household, one third shared between friends and neighbors and the final third given to the poor.

The eve of the festival called "arife," which begins Friday at noon, is traditionally spent preparing for the upcoming three-day festival. The day is spent cleaning and cooking and parents will buy new clothes for their children to wear during the holiday and donate their old clothes to the poor. The Feast of Sacrifice holiday is all about charity and community and therefore once the holiday commences the days are filled with visiting family and friends as well as members of the community and distributing alms whether it is a portion of the sacrificed animal or other forms. The community makes a concerted effort to ensure that all of the impoverished somehow benefit from the Feast of Sacrifice.

Family ties are strengthened through the ritual of paying visits to the elder family members and then moving down the chain to younger relatives and finally friends and neighbors. Children are given the opportunity to bond with older generations who will hand them pocket money. When greeting an elder member of the family the younger member will kiss their hand and then bow down their forehead to touch the outer side of the elder's hand in a steadfast sign of respect. The morning prayer on the first day of the eid is widely attended, while the actual slaughter of the sacrificial animal can be done on any one of the three days of the holiday, preferably in the morning. In the not so distant past, the ritual could be conducted in gardens, on streets or in other public areas by local butchers or even the head of a household. However, there are now strict regulations enforced ensuring the slaughter and butchering of the animal is conducted in specially designated locations and by trained professionals. There are also strict rules in place regarding the animal's eligibility for sacrifice; they have to be at least one year old, in good health and preferably male (to symbolize the ram from the tale of Abraham).

Increasingly of late and especially in urban areas, families have begun to make charitable donations in lieu of sacrificing an animal. Sometimes they will donate to certain organizations that handle the slaughtering and distribution of meat on their behalf. In addition, the animal skins are traditionally donated to the Turkish Aviation Association and other charity foundations.

Government offices, schools, post offices, banks and many shops will be closed for the duration of the holiday, while supermarkets may be open for restricted hours. Hotels, restaurants, transportation and travel can be hectic at this time as many people pay visits to family and friends to celebrate the holiday. The airport and international flights will also be busy as many will be heading to or returning from Mecca to perform the Hajj pilgrimage and will be unmistakable in their white garb.

Every year eid begins approximately 11 days earlier in line with the lunar calendar. In 2015, the Feast of Sacrifice will begin on Sept. 23, while in 2016 it will fall on Sept. 12. Watch your step this week in more ways than one as the one constant of the very sacred Kurban Bayramı is the urban legend that it never fails to rain on the third day of the holiday.