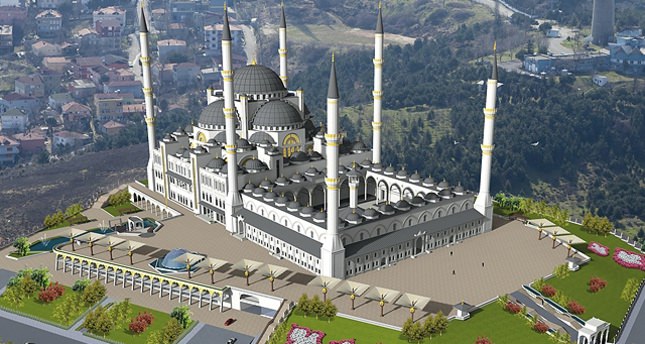 by AA Nov 16, 2014 12:00 am
Mosque construction has been a part of Turkish tradition for centuries, but cultural changes are now sweeping this art as two female architects pave the way for more 'female-friendly' places of worship

Istanbul's planned Çamlica Mosque, which will be the biggest in the history of the Turkish Republic, is being designed by two female architects, Bahar Mızrak and Hayriye Gül Totu, with a budget of around TL 150 million ($66.5 million).

The new building will account for "positive discrimination for women," said Metin Külünk, construction engineer and president of the mosque's foundation.

"With a separate place for women to perform ablution and an elevator taking them to the place where they can pray, women will also be able to use a convenient childcare room," Külünk told Anadolu Agency (AA). Planned to be built on a 30,000 square meter area in the Üsküdar district of Istanbul, Çamlica Mosque will also include a special place for the disabled, a platform where visitors can observe prayers, an Islamic art gallery and museum, a library and a car park for 3,500 vehicles.

Such facilities are not very common across Turkey, where in the past, some mosques used to offer worshippers, especially women, secluded, stuffy and segregated quarters with their children. This was mostly because more men made use of the mosque, meaning that many women's needs were overlooked.

However, a younger generation is now arguing that mosques should be equally accessible for both sexes.

After performing evening prayer at Istanbul's historic New Mosque in the Eminönü district, Turkish student Hatice Eser, 21, told AA, "I spend most of my free time outside of home, which means I need a space pray. We already have a number of mosques, but the facilities are not satisfactory."

She claims that many mosques are male-oriented and that there are only small places for women, which are not enough to meet public demand.

This desire for innovation in building mosques has also been found outside Turkey.

Fiyaz Mughal, the founder and director of the U.K.-based non-profit organization Faith Matters, said, "We began questioning why we are not catering to women's needs and not creating architecture to meet the needs of men and women. Now, that change has been taking place over the last 10 years and is really starting to show itself today."

Mughal and his colleagues prepared a directory of the 100 most 'women-friendly' mosques in England, which he said, "Was initiated to show examples of good practices in relation to the involvement of women in mosques."

In Denmark, another example of a women-friendly mosque is being planned in the country's second-biggest city, Aarhus. Construction will start in 2016 if the local municipality agrees on "a decent location to build the mosque," said Metin Aydin, the mosque's architect of Turkish-origin. Aydin said the mosque's design was a combination of Ottoman Islamic architecture and the local traditions of Denmark and Scandinavia.