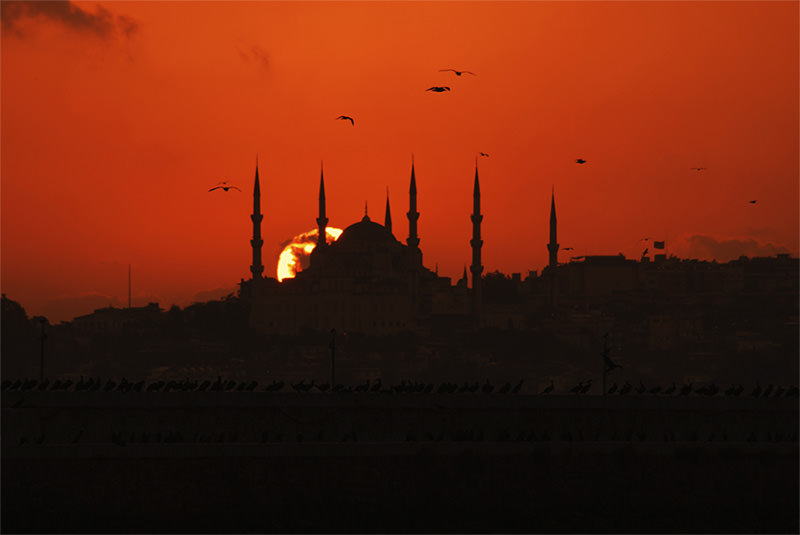 The Islamic term ‘jihad,' meaning ‘struggle' in Arabic, is misinterpreted in today's lexicon. It does not mean forcing someone into accepting Islam or its belief because, as stated in the Quran, 'There is no compulsion in religion'

Osman Gazi, the founder of the Ottoman Empire, once gave a piece of advice to his son: "My son, our intention is to spread the religion of Allah, not to declare war or conquer land." These words formed the basis of an imperial state and paved the way to create a powerful organization and society while extending the empire's territories over three continents.

Jihad does not mean forcing someone into accepting Islam or its belief because, as stated in the Quran, "There is no compulsion in religion." Rather, the word "jihad" means "struggle" in Arabic.

In Islamic law, jihad also refers to fighting against an enemy who attacks a country's territory and its citizens. This is a kind of national defense - Islamic governments are eligible to declare war, and any warfare without its approval is not legitimate. Similar group activities, under whatever name or form, are seen as illicit. By no means can they achieve victory. Prophet Muhammad declared war against his enemies after he founded an Islamic state following the Hijra (migration to Medina). For him, it was unacceptable to attack and kill peaceful citizens in the name of jihad without state power. Such activities are considered as a crime and those committing it are severely punished.

The rules of Islamic warfare are set as follows: first, self-defense is necessary to avoid enemy attacks; second, response to the call of a Muslim community in danger; and third, the violation of a peace agreement will have harsh consequences. Islamic law does not recognize the declaration of war to conquer new territories, convert people to Islam or collect more goods and property. At the time of the Prophet Muhammad, the main reason for war was the hostile attitudes of non-Muslims. In this regard, jihad is the ultimate way to sustain peace. The Quran says "Reconciliation is best," and advises Muslims to make peace with their enemy.

The enemy is notified prior to the war because, as pointed out in religious accounts, "This is how it should be done so that people understand Muslims do not fight for hegemony and property." If the enemy attacks first, there is no need to declare war. Islamic law prohibits Muslims to fight against a country with which they have previously signed a peace treaty. However, the peace treaty can be terminated if it serves the common good of the public. Again, this must be announced in advance, and Muslims who act against peace treaties are punished.

A Muslim country should be powerful enough to declare war on another country. If the enemy is more powerful than the Muslim country, the assault will not be lawful. A peace treaty must then be signed and the less powerful side retreats. Nobody attacks someone who already knows he or she could die. Suicide attacks especially, are not at all acceptable in Islam because the Quran bans Muslims from putting themselves in danger.

War is not only declared against non-Muslim enemies. An advisory committee can be sent to those who rebel against the state. The main reasons for the rebellion are examined and the situation is rehabilitated, if necessary. Otherwise, war would be indispensable. Islamic law specifies that a Muslim country is allowed to declare war against another Muslim country if one unjustly attacks the other. Everyone has the right to defend themselves and Islam forbids cruelty.

A war is generally led either by the ruler or an assigned commander. The commander's legitimate decisions must be followed. When the target city is surrounded, its citizens are first invited to convert to Islam. If they reject the offer, they are asked to become citizens of the Islamic State in return for paying "jizya" (a tax paid by non-Muslims). If the enemy rejects both, the war might continue.

If the enemy army is more powerful than the Muslim one, a peace treaty might be signed in return for offering goods. Islamic law also protects ordinary citizens who do not participate in warfare. Moreover, trees are not cut down, crops are not burned and water is not poisoned. However, these may occur in order to damage the enemy upon the consent of the commander. Plunder is not acceptable, but promised to encourage soldiers when the war is raging.

During war, different kinds of weaponry were used to repel enemy forces. The Ottoman Empire became an advanced imperial state thanks to its military power. However, this turned into its weakest point later. Drums were beaten loudly and the Ottoman marching band used to stir up soldiers during battle. There were also those who boosted the soldiers morale by saying that the enemy is about to lose.

According to Islamic law, the goods of the enemy can be taken as war booty. One fifth of these goods are allocated for the treasury, while a portion of it is shared among the army. Individuals such as spies who do not actively participate in the war also get their share. Prior to distribution, a certain portion of the war booty is given to women, children and caregiving slaves who helped soldiers during the war. The land taken from the enemy was then rented out to Muslim citizens.

Muslims who die during war are honored as martyrs. Martyrdom is considered an important and high status in Islam. It is widely believed that the sins of Muslim martyrs are forgiven and they will go to paradise. Indeed, martyrs are buried in their bloodied clothes. They are not washed or wrapped in a shroud.

Those who declare an illegitimate jihad are seen as sinners and are supposed to be punished by the state. According to the Quran and the hadiths of Prophet Muhammad, if they die in war, they are not recognized as martyrs.

Slaves captured in war should be treated humanely. Any torture or maltreatment is prohibited. Once the Prophet Muhammad saw slaves being kept under the hot sun; he then prohibited the torture of any slave and ordered them put in a proper place. When the war ends, the enemy forces can be killed if necessary, released in return for ransom or captured in the Islamic country. Those who surrender during the war are not killed or captured. Citizens of the defeated country either leave or continue to live with the same rights given to Muslims. As a final example, Prophet Muhammad released captives in return for teaching reading and writing to 10 children.
Last Update: Mar 22, 2015 8:46 pm
RELATED TOPICS