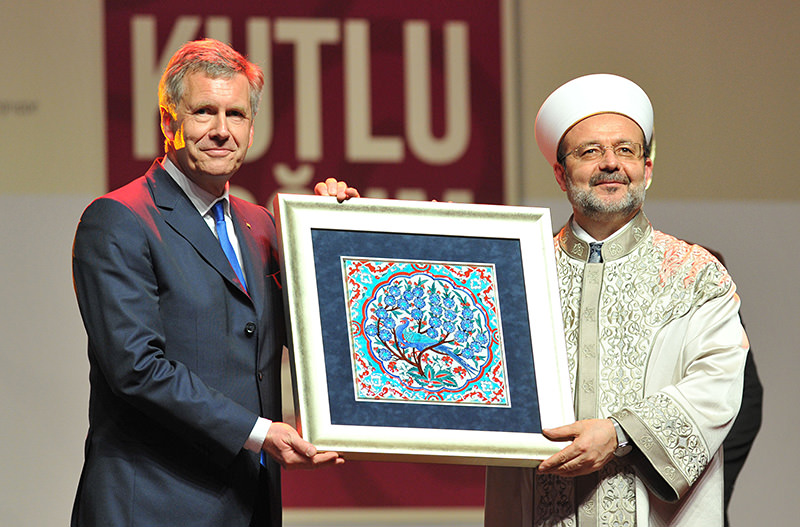 by Anadolu Agency Apr 12, 2015 12:00 am
All religions, beliefs and cultures are intertwined, Turkey's top cleric said on Saturday in Germany, adding with "regret" that mankind is failing to manage this multiculturalism.

The head of Turkey's Presidency of Religious Affairs, Mehmet Görmez spoke at an event held in Lanxess Arena in Köln to commemorate Prophet Mohammed's birth. About 20,000 people attended the event.

Görmez said that people's worlds are intertwined, distances have come close, but people's tolerance toward each other has been reduced.

He said that the bloodshed in the Muslim world continues. "Muslims in Baghdad, Damascus, Cairo and all over the world are in difficult situations," he said.

Görmez called on the people who profess love for the Messenger of God to help turn this love into social peace and justice.

The former German President, Christian Wulff also participated at the event, saying that "[Islamic holy scripture] Quran does not approve of violence and terror."

Germany, home to millions of Muslim emigrants, is having debates about multiculturalism. Although the country's leaders are calling for raising the level of integration for migrant families, opponent movements are taking place.

A far-right movement Patriotic Europeans Against the Islamization of the West, also known as PEGIDA, was established in Germany in 2014, and have been holding many protests in Germany and other EU countries.