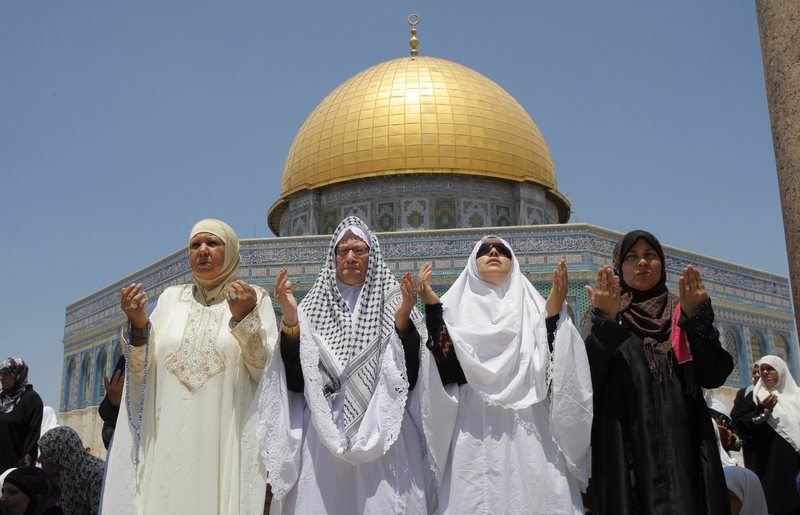 The Dome of the Rock is seen in the background (AP Photo)
by Yusuf Ziya Durmuş Apr 14, 2015 12:00 am
Turkey today is scheduled to launch pilgrimage trips for the Muslim faithful with a landmark stopover in Jerusalem.

The first flight for umrah, or lesser pilgrimage in Islam, with a stopover in Jerusalem was scheduled to be launched today by Turkey's Presidency of Religious Affairs (DİB).

The inclusion of Jerusalem to the itinerary of Turkish pilgrims comes at a time of strained relations between Turkey and Israel.

The DİB has announced earlier that Jerusalem would be added to places pilgrims can visit following a high demand from would-be pilgrims seeking to visit holy sites of Islam in the ancient city.

Some 149 people were scheduled to leave on two flights from Istanbul's Atatürk Airport today. Pilgrims will stay in Jerusalem for three days before heading to Saudi Arabia, where they will stay for 11 days for the culmination of the pilgrimage at Kaaba, the holiest site in Islam. Umrah is not compulsory for Muslims but it is highly recommended for those who can afford it. It is not among the pillars of Islam unlike Hajj, the annual pilgrimage every able-bodied Muslim is obliged to perform, but it is very popular among the faithful in Turkey.

Jerusalem is home to the al-Aqsa mosque, one of the holiest sites in Islam, which was replaced by the Kaaba as qibla, the direction all Muslims are obliged to turn while praying. Muslims' access to the site is often subject to severe restrictions by the Israeli government. It is not clear whether Turkish pilgrims would be allowed into the mosque where severe clashes between Israeli forces and Palestinian faithful seeking to pray at the site are common. Jerusalem also houses tombs of the prophets İbrahim, İshak, Yakup and Davud or Abraham, Isaac, Jacob and David, as well as Salman al-Farsi, a loyal companion of the Prophet Muhammad and Rabia al-Adawiyya, a renowned Muslim mystic.

Like umrah, visiting Jerusalem is not compulsory in Islam but the al-Aqsa mosque is highly revered among Muslims, as it is also believed to be the site of the Prophet Muhammad's ascension to heaven.

Turkish officials told media outlets that Israel reacted positively to the Turkish pilgrims' visit to Jerusalem, as long as they are eligible for visas from Israel.

DİB President Mehmet Görmez has recently said that Jerusalem has long been a part of umrah in Turkish history, although it is excluded from itineraries at present. "We abandoned Jerusalem and handed it to another country, but Jerusalem was not theirs, it belongs to Muslims," Görmez said, referring to Israel. "Jerusalem is the home of prophets and the sacred. Our ancestors had always paid a visit to Jerusalem while traveling to Kaaba, but we neglected it. It was wrong," Görmez said.

Jordan will provide access to Jerusalem for Turkish pilgrims and they will be transferred to the Israeli-occupied city via Amman.

Turkey has strained relations with Israel after the infamous raid on a Turkish vessel carrying activists to Gaza under the Israeli blockade and criticism of Israel by the government leaders over attacks on Palestinians. The inclusion of Jerusalem onto the itinerary of pilgrims dates back 10 years when Turkey and Israel had relatively good relations. The Israeli Ministry of Tourism was working to promote Jerusalem as an additional pilgrimage destination, according to Turkish media outlets, the year before relations went downhill.

It is not known whether Jerusalem will be included in state-sponsored Hajj trips for the faithful in Turkey.

Jerusalem was Ottoman territory until 1918 and even after its capture by British forces that year, it remained part of the pilgrimage for Turks for decades. The Arab-Israeli war in 1967 forced pilgrims to change their course.
Last Update: Apr 14, 2015 6:23 pm
RELATED TOPICS