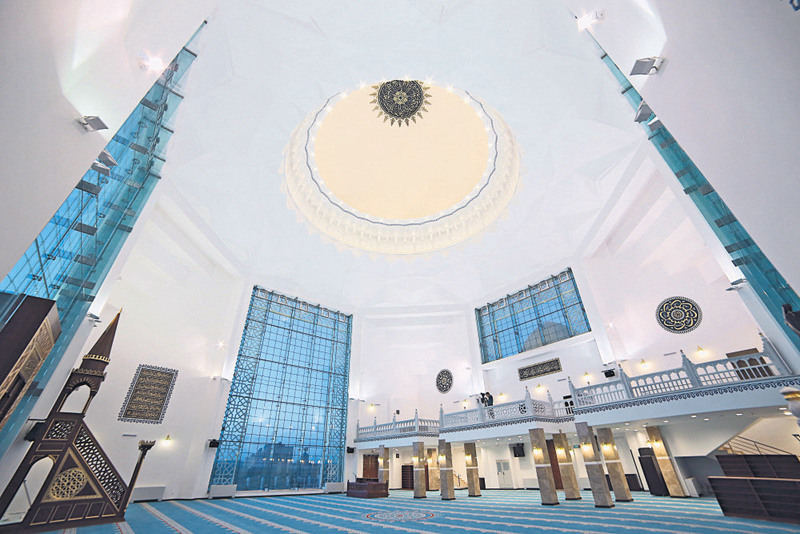 Built by the Turkish Religious Foundation in Turkistan, Kazakhstan, the Khoja Akhmet Yassawi mosque opened its doors for prayers today. The mosque has a capacity of 3,000 people and carries traces of Central Asian and Seljuk architecture

Opening for prayers today is the mosque and külliye (a social complex) that was built by the Turkish Religious Foundation (TDV) in Turkistan, Kazakhstan in the name of Khoja Akhmet Yassawi, who played an important role in spreading Islam from Kazakhstan to Anatolia. President Recep Tayyip Erdoğan is already in Kazakhstan for an official visit and will attend the opening ceremony of the mosque with his counterpart, Nursultan Nazarbayev.

Mazhar Bilgin, the vice president of TDV's board of trustees, said that the foundation was among the first nongovernmental organizations that visited Kazakhstan after they declared their independence. Stressing that the TDV places great importance on mosques, which are needed by Muslims, and have been neglected for a long time, he said they have restored the Micurin, Tolgar, Nikolayevka and Almatı Central mosques in Kazakhstan. From 1996 to 2014, the foundation provided $2.8 million in financial aid to the education of students from the Faculty of Theology at the University of Foreign Languages and Business Career in Almaty from 2006 to 2014. Moreover, 36 Kazakh students – including 26 high school students, eight undergraduates and two graduate students – are being educated in Turkey thanks to TDV scholarships, while 20 students from the University of Foreign Languages and Business Career are continuing their undergraduate studies at Sakarya University. Bilgin said the foundation has initiated many projects, and highlighted that new projects are on the way. "The TDV, which undertakes important projects for religious services and education, as well as social and charitable events in Kazakhstan, finished the construction of the mosque, located near the tomb of the great Turkic poet and Sufi mystic, Khoja Akhmet Yassawi," he said.

Listed as a world cultural heritage by the United Nations Educational, Scientific and Cultural Organization (UNESCO) in 2003, the tomb of Khoja Akhmet Yassawi is now home to a mosque and külliye, the foundations of which were laid on Oct. 16, 2009. The mosque cost TDV $10,461,000 and has a capacity of 3,000 people. The house of prayer, which is a symbol of Turk-Kazakh friendship, has the features of classical Kazakh architecture, however, the interior of the buildings is decorated in a style that emphasizes good relations between the two countries. The külliye and the mosque carry traces of the architecture of Central Asia and the Seljuks, and feature a library, a soup kitchen, multi-purpose halls, a cafeteria, dining halls, rooms for imams and muezzins, classrooms, a morgue and many other service halls. Moreover, the foundation of another mosque, which will be built on the campus of Khoja Akhmet Yasawi International Kazakh-Turkish University, was laid on the same day. The construction will be financed by donations of philanthropists and undertaken by the TDV. The university features seven faculties and one vocational school, and currently educates 14,000 students with its 880 facility members and staff.

The Turkish Religious Foundation has been developing projects for Muslims across the world. The foundation initiated a new project last year that aims to translate the Islamic Encyclopedia into Russian to provide more information to Muslims residing in the Russian Federation. The project intends to present information about the prophets, well-known Islamic leaders and daily religious practices. The TDV also lent a hand to Muslims in Africa, developing educational projects. In February, Bilgin announced that the foundation would continue its educational projects and will open two more schools in Africa that teach in English and French.

The foundation has brought more than 3,000 students to Turkey to complete their education, with most being imam-hatip and theology students. The TDV has 16 schools in 10 countries with 2,954 students, as well 4,389 graduates.
RELATED TOPICS