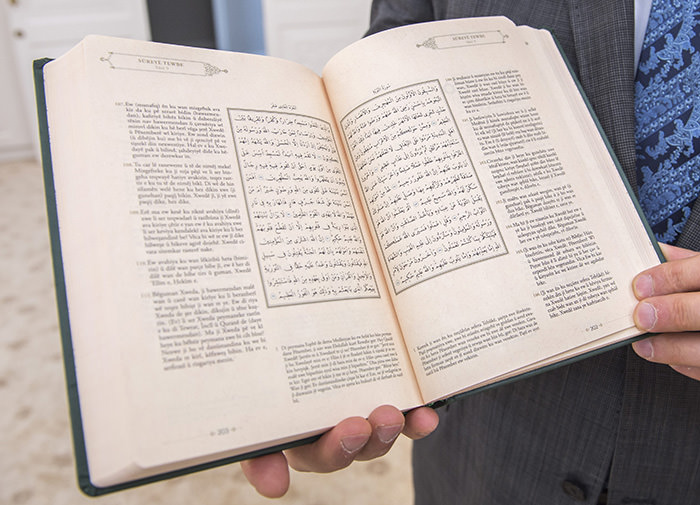 |AA Photo
by Anadolu Agency May 01, 2015 12:00 am
The Turkish Presidency of Religious Affairs (Diyanet) has completed its five-year effort of translating the Quran into Kurdish.

"The presidency is a universal and global institution that seeks to convey Islam's message of mercy to humanity in all languages spoken on earth," the religious body's Director-General for Religious Publications Dr. Yuksel Salman told The Anadolu Agency in an exclusive interview.

Salman highlighted the universality of Islam, quoting a verse from the Quran which is interpreted as: "And of His signs is ... the diversity of your [mankind's] languages and your colors. Indeed in that are signs for those with knowledge."

He said the religious authority has published 1,150 works ever since it was founded in 1924, adding that the variety of its publications increased after the 1990s.

Salman added that the efforts to translate the Quran into different languages have accelerated in the last decade, with works being published in a total of 26 languages up until now -- mainly in German, English, French and Russian.

"The latest is the Quran's translation into Kurdish which we printed 10,000 copies of," he said.

Kurdish belongs to a northwestern Iranian branch of the Indo-European family. It is accepted as the fourth most spoken language in the Middle East, after Arabic, Persian and Turkish.

The director-general emphasized that the translation was performed by experts with vast knowledge of Kurdish and Arabic.

Highlighting their sensitivity while providing translations of the Quran, Salman said the Kurdish translation was first analyzed by members and experts from the religious authority, along with professors from faculties of theology at Turkish universities, before it was published.

Salman said that the presidency already issued many works for Muslims, mainly in the Turkic Republics, the Balkans, the Caucasus and the Far East.

He added that they will also publish translations in 15 more languages, primarily in English, French, Russian, Azerbaijani, Kazakh, Danish and Albanian, and will send some of them abroad.

"There are also people and tourists who come from abroad to Turkey, especially coastal areas and wish to learn about Islam and the Quran," he said.

Salman added that the interest in Islam and the Quran has surged after the rise of Islamophobia, especially in Europe "as we learned from our attaches, counselors and other officials in those countries."

He also gave the example of a publication of the Quran in Danish, which was a best seller in Denmark.
Last Update: May 01, 2015 3:02 pm
RELATED TOPICS