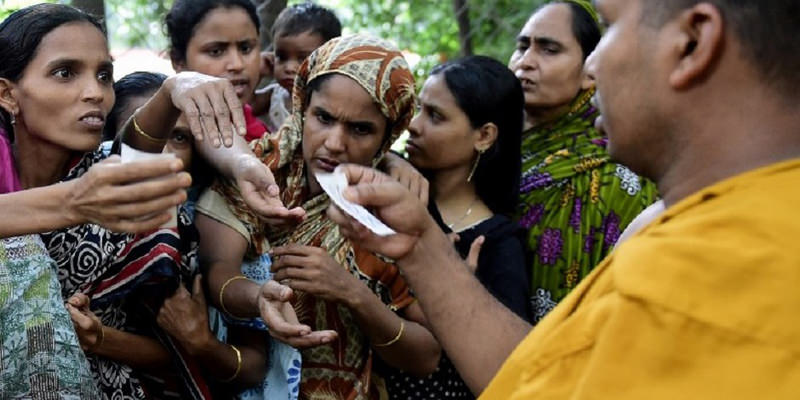 by Jul 07, 2015 12:00 am
A Buddhist monastery in Bangladesh is serving food to hundreds of poor Muslims during Ramadan in a rare example of social harmony between the religions in the South Asian nation. Dharmarajika, in the capital Dhaka, has become a hit on social media since it started distributing daily food packs for Muslims who break their fast during the Islamic month at sunset, known as iftar.

"Buddhism taught us that serving humanity is the ultimate religion. We are feeding the poor Muslims who cannot afford to buy proper meals to break their fast," Suddhananda Mahathero, the head monk of the monastery, told Agence France-Presse (AFP). When AFP visited on Monday evening, more than 300 Muslims were waiting at the gate of the monastery in Dhaka's Basabo neighborhood to receive some iftar delicacies. "I can eat some good food served with love and care," said 70-year-old Amena Khatun, who added that she had walked several kilometers to get there. As a young monk distributed tickets to hungry Muslims, police were on hand to ensure the process remained orderly. "This is such a wonderful example of religious harmony: showing respect and affection to fasting neighbors without thinking of the difference of religions," police officer Asad Uzzaman said. Muslims make up around 90 percent of Bangladesh's 160 million people, with a tiny community of Buddhists residing mostly in the country's southeastern districts bordering Myanmar. In September 2012, tens of thousands of Muslims vandalized and torched nearly a dozen Buddhist temples in the south of the country following allegations that a Buddhist man had desecrated a Quran.

Many Muslims took to social media to thank the Dharmarajika monastery for their food distribution, posting photos on Facebook of the yellow-clad monks handing out supplies. Others praised the monks on Twitter. "I really appreciate the initiative and thank them," Nur Hossain, a banker, told AFP. The monastery was established in 1949 and is home to more than 700 orphans who study at a free school it runs.
Last Update: Jul 07, 2015 9:36 pm
RELATED TOPICS