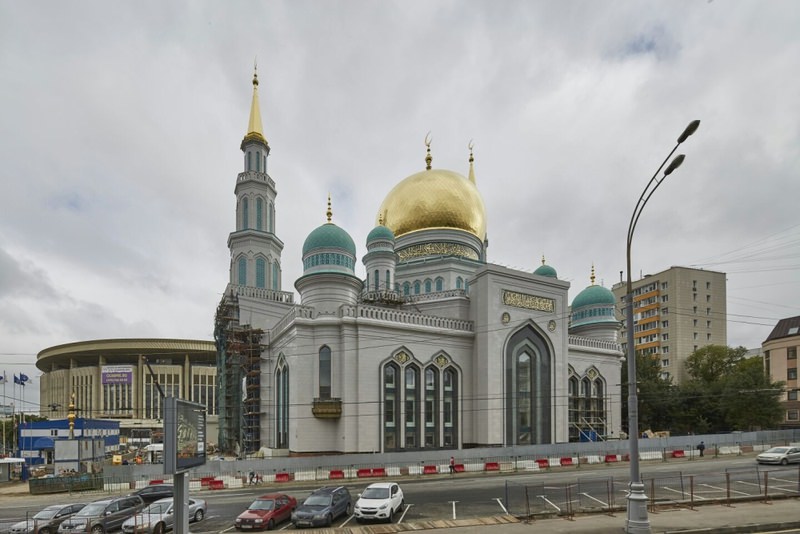 by Daily Sabah Sep 18, 2015 12:00 am
Scheduled for Sept. 23, the opening ceremony of Moscow Cathedral Mosque, which was established by the Muslim Board of Russia, will be held with the attendance of political and spiritual leaders of Islamic countries. The mosque's interior design was inspired by Ottoman style in cooperation with the Presidency of Religious Affairs (DİB) and the Turkey's Religious Affairs Foundation (TDV).

Mazhar Bilgin of the TDV said his institution pioneered the construction of 3,421 mosque in Turkey as well as 100 mosques in 50 countries.

Speaking about the interior design of the newly built mosque in Moscow, Bilgin said: "Our foundation contributed the minbar, mihrab, tiles, chandeliers and carpets of the mosque for the Russian Muslims. Its decor, which includes calligraphy and hand-made embroidery that reflects 16th and 17th century Ottoman art, was made by our institute. Classic chandeliers that suit the mosque's aesthetics were hung inside. Also, specially designed 6-kilometer-long carpets were laid.

The six-story Moscow Cathedral Mosque is the largest mosque in Europe outside of Turkey, with an almost 19,000-square-meter area. Along with the male and female prayer halls, the mosque has a conference hall and an exhibition gallery.

Built in 1904, the historical Moscow Cathedral Mosque, located on Olimpiysky Avenue, was demolished in 2011. It has been under construction for four years. With a population of nearly 13 million, Moscow is now home to at least 1.5 million Muslims.
RELATED TOPICS