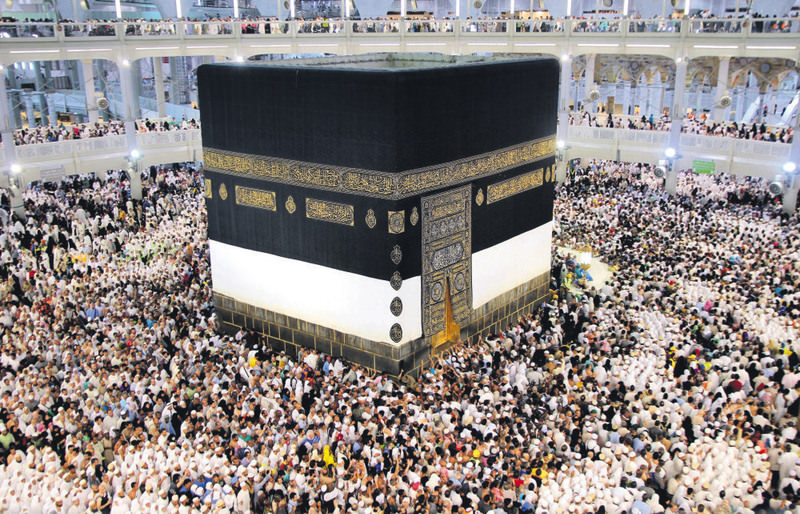 by reuters Sep 23, 2015 12:00 am
For the millions of Muslims set to start the annual hajj pilgrimage in Mecca on Tuesday, the challenge of reaching the city where Islam was born has paled in comparison with finding their way once they got here.

Islam's holiest city doubles in size each year as pilgrims from across the world, speaking dozens of languages, throng its streets, battling heat and traffic and improvising techniques to locate friends, compatriots and sacred sites.

"Who did not get lost?" asked Hejar, one in a group of about 20 Algerians who draped their national flag over their shoulders to quickly identify each other among the uniform white towelling robe that all pilgrims must wear.

On Tuesday, the authorities opened the route to Mina, a huge tent city just to Mecca's east where all the pilgrims must camp for the next three days as the hajj reaches a climax with the ritual ascent of Mount Arafat, a night on the Muzdalifa plain and the stoning of the devil at Jamarat.

Around 2.6 million pilgrims are expected to make the hajj this year, although the Saudi Arabian government will not announce the figure until Thursday when the annual pilgrimage reaches its conclusion with the Eid al-Adha holiday.

But even before the crowds of identically dressed pilgrims gather at the main sites to perform the same rituals in unison, the difficulty of finding the way around the city of Mecca, particularly around its enormous Grand Mosque, is intense.Hejar, the Algerian woman, said she lost her party almost as soon as they arrived, during the "tawaf", when pilgrims circle the black stone of the Kaaba in the centre of the mosque, the point towards which all Muslims pray five times a day.

"We walk in groups and we do the rituals in groups. We stick to one another," she said with a laugh. When she got lost, it took her three hours to find her companions again, despite the fact that she, unlike many pilgrims in Mecca, has the advantage of speaking Arabic.

The Saudi authorities deploy 100,000 police and vast numbers of stewards to ensure safety and help those who lose their way. They have also invested in expensive infrastructure, including a new urban railway, to ferry pilgrims around safely. They give useful tips like noting the number of the mosque gate they use.

But in a crowd of such size, many fall back on their own techniques.

The most disciplined groups seen on Tuesday included parties of Asian pilgrims walking hand-in-hand to stay together and a line of African Muslims who each held a shoulder of the person in front.

Other groups followed more experienced companions holding up sticks or coloured umbrellas, while all around were pilgrims talkling into disposable mobile phones they bought to contact friends or relatives in case they got lost.

"You make sure you come back the same route," said Abdulrahman, a pilgrim from Taiz in Yemen, where Saudi-backed forces are battling the Houthi militia. "The best thing is to write down the details of routes you go along," he added.
RELATED TOPICS