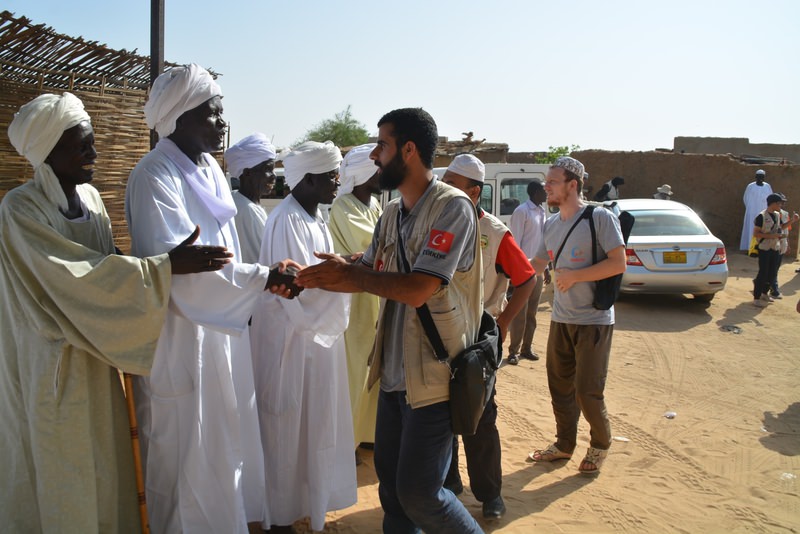 Turkey's Cansuyu relief association distributed meat to people in Darfur's Al-Fashir area in Sudan for Eidal-Adha on Sept 25, 2015. (AA Photo)
by Anadolu Agency Sep 25, 2015 12:00 am
Turkish humanitarian aid foundations distributed meat to thousands of Muslim families in Sudan and Ethiopia on Friday, the second day of the holy festival Eid al-Adha, also known as the "Feast of the Sacrifice".

In Addis Ababa, Turkey's Yardimeli relief association distributed meat to some 2,000 families in the city's Varabi and Velkiti districts.

"We distributed humanitarian aid in these areas in Ramadan [in July and August], and now we're doing it for the Eid al-Adha," Recep Gökcan, a member of Yardimeli's administrative staff, told Anadolu Agency.

He went on to note that aid distribution was also targeting other poor areas of the Ethiopian capital.

On the same day, Turkey's Cansuyu relief association distributed meat to people in Darfur's Al-Fashir area and in IDP -- internally displaced person -- camps in western Sudan near the border with Eritrea.

Musa Ahmet Kaya, the Cansuyu association's representative responsible for the Al-Fashir area, told Anadolu Agency that it was "the first time for the area to see an Eid al-Adha sacrifice ceremony carried out by a relief body".

He went on to note that thousands of internally displaced people currently faced starvation and thirst due to ongoing conflict in the Darfur region.

According to Kaya, the Cansuyu association was working in tandem with a Malaysian relief association to provide help to poor Muslims.

The Eid al-Adha commemorates Prophet Ibrahim's (Abraham's) willingness to submit to God's will by sacrificing his son.

Muslims traditionally perform a ritual sacrifice for the Eid, usually a sheep, goat or cow.