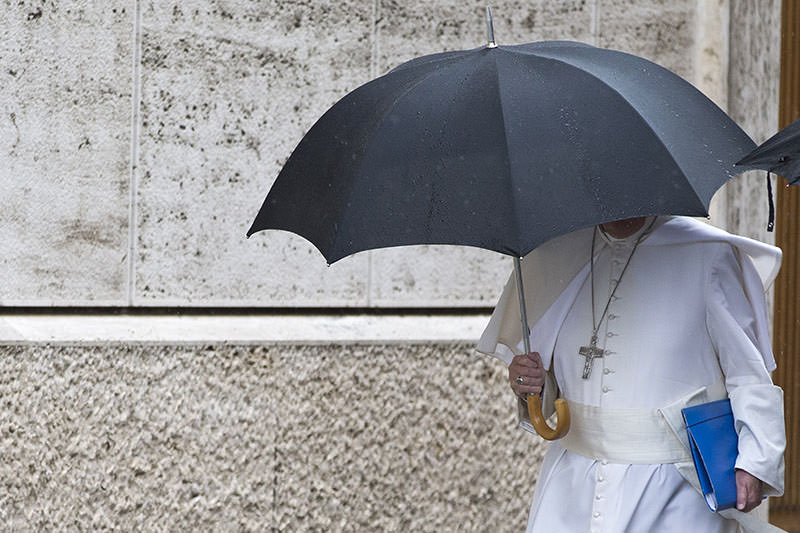 Pope Francis arrives for the afternoon session of the Synod of bishops, at the Vatican, Saturday, Oct. 10, 2015. (AP Photo)
by French Press Agency - AFP
Oct 14, 2015 12:00 am
Pope Francis on Wednesday offered a surprise public apology from the Catholic Church for a series of scandals which have shaken the city of Rome and the Vatican, from gay sex to drug use.

The Vatican has been the focus of several controversies including the coming out of a gay priest and the leaking of a controversial letter, while reports have emerged in Rome of drug-popping priests frequenting male prostitutes.

"I want, in the name of the Church, to ask forgiveness for the scandals which have recently hit Rome and the Vatican. I ask you for forgiveness," Francis said at the start of his weekly general audience on Saint Peter's Square.

"It is inevitable that scandals happen, but 'Woe to that man by whom the offence cometh!'" he said, quoting a passage from the Bible.

Vatican expert Joshua McElwee, writing in the National Catholic Reporter, described it as an "extraordinary step".

Papal spokesman Federico Lombardi said it was "not up to me to interpret" Francis's words, but admitted that Italy's newspapers in particular have recently been full of "disturbing" stories with "negative examples" of behaviour within the Church.

The 78-year-old pope has been presiding over a three-week global council of cardinals and bishops, where debates over the Church's teachings on the family have been overshadowed by tales of Machiavellian plots and betrayal.

The leak of a private letter from rebellious cardinals has revived a cloak-and-dagger atmosphere likened to the "Vatileaks" scandal in 2012, when Pope Benedict XVI's butler revealed fierce infighting in the highest echelons of the Church and allegations of serious fraud in the running of the city.

"There is growing concern at the Vatican over the multiplication of scandals and a return of the 'Vatileaks' syndrome, a climate of revelations, suspicion and rumours of a 'gay lobby' that helped convince Benedict XVI to resign in 2013," religious watcher John Thavis said on his blog following the pope's mea culpa.

Francis may hope that his wide-sweeping apology will shame schemers in the centuries-old institution.

Vatican analyst Massimo Franco wrote in the Corriere della Sera daily that it appeared there was a bid to "recreate the climate of Vatileaks... an operation that's been planned for some time, and which aims at discrediting not the synod but the two years of the Argentinian pope."

The council was overshadowed from the start by the surprise declaration by a Polish priest employed as a senior official at the Vatican that he was a practising homosexual.

Krzystof Charamsa was immediately fired but the coming out added fuel to a fire already raging between conservative and liberal wings of the Church over the divisive issue of its relationship to gay believers.

Reports also emerged recently of several priests in a Rome parish accused of using male prostitutes and paying for sex with homeless men in a public park in the Italian capital while high on poppers.

And the Vatican rumour mill went into overdrive in August after a former Polish archbishop who would have been the first high-ranking Catholic Church official to go on trial for pedophilia was found dead.

The Vatican ordered a swift post-mortem and said Jozef Wesolowski, who had been charged with sexually abusing minors during his period as ambassador in the Dominican Republic, had died of heart problems.

The pontiff was also drawn into the murky world of Italian politics this month after pointedly denying Rome's mayor Ignazio Marino had been invited on a papal trip to the states.

The perceived put-down was seen by many to have contributed to Marino's forced resignation last week.

Since his election in 2013, Francis has apologised on behalf of the Church to sex abuse survivors, for the persecution of protestants in northern Italy, and for complicity in the oppression of Latin Americans during the colonial wars.
Last Update: Oct 14, 2015 11:41 pm