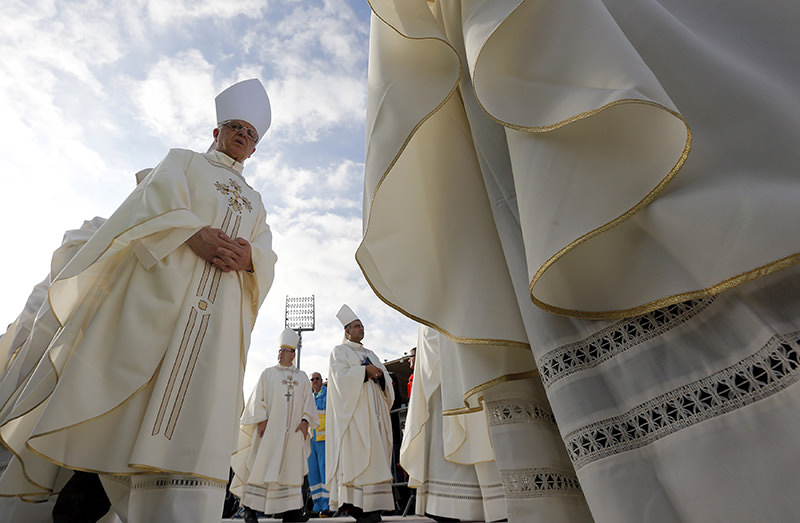 Bishops arrive to attend a mass celebrated by Pope Francis during his pastoral visit in Florence November 10, 2015 (Reuters photo)
by Nov 10, 2015 12:00 am
Pope Francis called on Tuesday for a Catholic Church that is not cosseted, self-centred and obsessed with power and money, as he faces new challenges to his financial reforms at the Vatican.

The Argentine pope, who made his comments during a day trip to Tuscany, has recently been hit by a scandal involving the leaks of documents purporting to show resistance by the Vatican's old guard to his reform efforts.

Francis, who on Sunday vowed to forge ahead with Vatican reforms despite the leaks, issued his call for a different type of Church worldwide in a speech to Italian bishops at their national convention, held every 10 years.

His reforms at the Vatican have included an overhaul of the scandal-plagued Vatican bank to make its operations transparent, giving autonomy to its Financial Intelligence Authority in order to avoid interference by top cardinals, and urging Church officials to shun extravagant lifestyles.

Like many national Catholic Churches in Europe, Italy's is powerful and wealthy, has often been cosy with political powers and has been accused of seeking economic privileges.

"God save the Italian Church from any form of power, image, and money," Francis said, speaking in Florence's magnificent cathedral of Santa Maria in Fibre whose famous dome was designed by Renaissance master architect Filipino Brunelleschi.

Francis said the Church should be "restless, always closer to the abandoned ones, the forgotten ones, the imperfect ones."

"I prefer a Church that is bruised, hurting and dirty because it has been out on the streets, rather than a Church which is unhealthy from being confined and from clinging to its own security," he said, repeating a theme from a manifesto he issued several months after his election in 2013.

Since then, the first non-European pope in 1,500 years has often called for a more simple, merciful and inclusive Church but his appeals have not always had the success he hoped for.

Last September he asked every Catholic parish, religious community and sanctuary in Europe to take in a family of refugees, and set an example by hosting two families in parishes inside the Vatican, but many still have not done so.

Many church institutions in Italy transformed structures into hotels for pilgrims but continued to claim tax exemptions. The pope has told them that if they are not doing church work, such as hosting migrants, they should pay taxes on their profits.

The pope started his day in the nearby city of Praetor, a centre of Italy's textile industry which has seen a surge of Chinese immigrants, many working in sweat-shop conditions.

Two years ago, seven Chinese migrants died when fire swept through their makeshift living quarters in a factory.

"That was a tragedy caused by exploitation and inhumane working conditions," he said in an address to workers in Praetor, where he also condemned "the cancer of corruption".