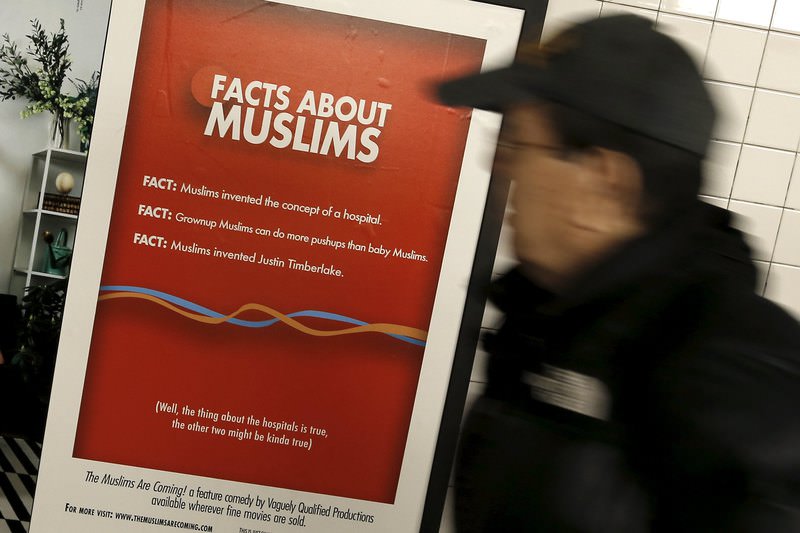 by Mar 09, 2016 12:00 am
Humorous ads for a documentary film that aims to promote understanding and tolerance of Muslims went up in New York subways on Monday after the movie's production company won a legal battle with the city's transit authority.

"The Ugly Truth About Muslims: Muslims have great frittata recipes," reads one of the ads created by comedians Negin Farsad and Dean Obeidallah who are using humor to break down stereotypes promote their documentary "The Muslims Are Coming."

The advertisements debuted after a federal court in Manhattan ruled in October that being Muslim was a religious, not a political, identity. The Metropolitan Transportation Authority has a policy prohibiting political speech in ads on public transportation.

The ad campaign strives to combat negative perceptions of Muslims as the world grapples with accommodating millions of people fleeing Middle East violence and abject poverty in other parts of Africa.

"The point of the movie is just to show Muslims in a positive light, to build a bridge with mainstream Americans," Farsad said in an interview. "Muslim-Americans can be super-hilarious and that's kind of just what we want to show people."

In June 2015, New York-based Vaguely Qualified Productions LLC, the company behind the documentary, filed a lawsuit against the transit authority after it withdrew prior approval for the ads. A federal judge had already allowed the transit authority to reject an ad from the American Freedom Defense Initiative after the agency adopted a policy against political advertising.

"Here we are 15 months later and a federal lawsuit later and finally these funny posters are going up that were tied to our film in which it shows Muslims being funny and in a different light," said Obeidallah. "That's all it was about."

The ads, which cost about $20,000, will be posted in about 144 subway stations, according to Farsad and Obeidallah.

One ad at the City Hall station in lower Manhattan carried three statements with the caveat that only one was true of Muslims. Edgar Sanchez, 45, of Queens, said he thought the ad was a positive attempt to combat stereotypes. "In every country and every religion there are good people and bad people," he said.