Istanbul marks Ashura Day at historic locations around the city 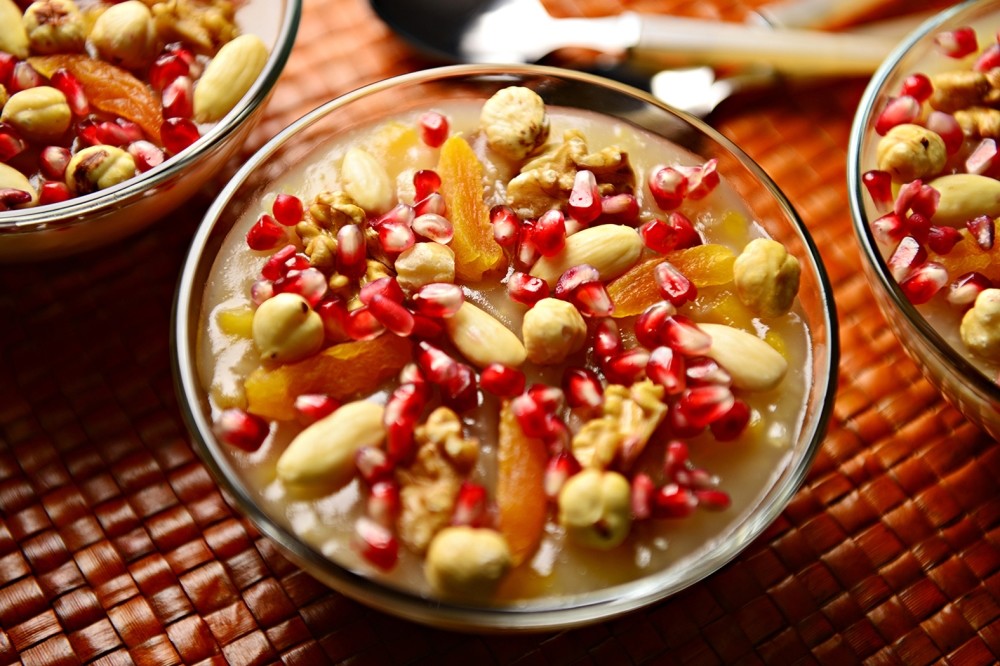 by Daily Sabah Oct 11, 2016 12:00 am
Being observed on the 10th of Muharram, the first month of the Islamic calendar, Ashura, an Islamic holiday, is widely celebrated in Turkey with consecutive events. Today, a traditional namesake dessert, also known as "Noah's pudding," is being distributed by municipalities and social groups in various cities. A mixture of morsels of grain and dried fruits in a sweet pudding garnished with pomegranate, the special dessert is a favorite, wintry taste for Turkish people.

In the historic Beyoğlu district, the metropolitan municipality will be distributing the dessert along İstiklal Avenue and stalls will be set up at the Spice Bazaars in Eminönü as well as Üsküdar Square on the Anatolian side to serve ashura to locals and tourists. A group from the municipal team is expected to visit shops in Taksim and the Spice Bazaar as well. Another ceremonial event will take place at Küçükçekmece Yahya Kemal Beyatlı Performance Center. Ottoman-style ashura was distributed to locals outside Hagia Sophia on Sunday.

Traditionally, ashura is made at home and shared with neighbors. It is also custom to prepare it in large cauldrons to distribute to the poor. This pudding is not just a tasty dessert but also rich in ingredients and healthy for the immune system, especially on cold days. The nuts in ashura also provide your body with iron, calcium, Vitamin E and Vitamin B, making it ideal for the winter months. There is no specific recipe to cooking ashura as there are dozens of different variations.

The word "ashura" means "10," referring to the date of the holiday. For Shiite Muslims, the Ashura Day is a major occasion, commemorating the martyrdom of Prophet Muhammad's grandson, Hussein ibn Ali and all his companions in Karbala, located in modern-day Iraq. They observe morning prayers and rituals representing the martyrdom while reenactments and plays are performed to keep his memory alive.

Sunni Muslims, on the other hand, revere Ashura Day as one of respect for Prophet Moses who was saved from the Egyptians by God. Therefore, the day also has significance for Jews and Christians. Some Sunnis observe fasting on this day, though it is not compulsory. The day also marks the day Noah left the ark. According to legend, Noah made this dessert on the ark by mixing whatever ingredients he had left on the ark.
RELATED TOPICS