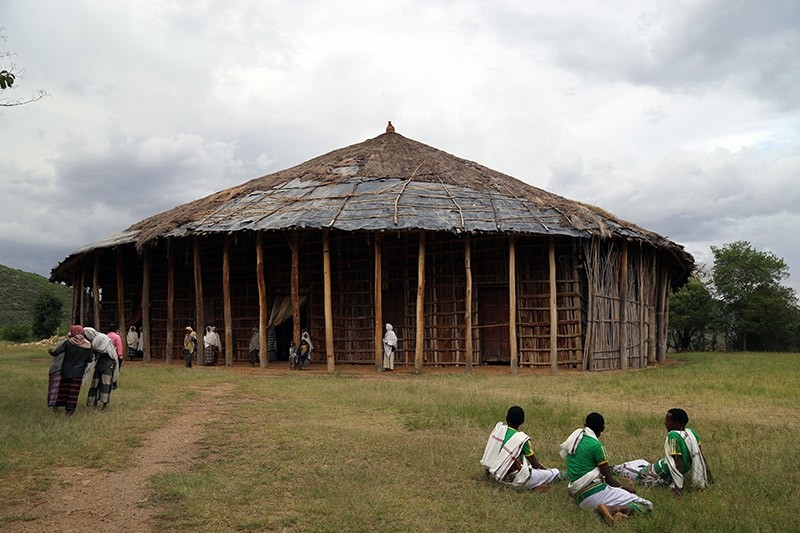 The Ethiopian religious site of Teru Sina, which features unique architectural characteristics, provides a successful model of religious tolerance with its opportunities for religious learning and socializing.

Religious pilgrimages to the shrine of Shaykh Awel reportedly take place twice a year, and it is not only Muslims who honor the Sufi saint, but Ethiopian Orthodox Christians as well.

The mosque of Teru Sina, located in Wollo province in northeastern Ethiopia, was constructed out of bamboo, straw and wooden posts between 1943-1956 and stands up tall till today. The circular structure has a size of 250 square meters, a height of 15 meters and rests on 40 wooden pillars.

Today, Teru Sina serves as a meeting place for Ethiopia's Muslims and forms part of a larger madrasa complex offering religious education, opportunities to socialize and to find peace and quiet. The site is surrounded by nature and offers its visitors an opportunity to relax by listening to the sounds of birds and the smell of trees. On religious holidays, hundreds of people gather at the place, sacrifice animals and make sherbet, a kind of natural lemonade, distributing these to visitors.

According to one version of its history, it was Sheikh Siray Mohammed Awel, born in 1875, who founded the mosque as a religious center. Sheikh Awel is said to have moved to Teru Sina in 1949, an area then riven by interethnic clashes between the Oromo and Amhara people. The sheikh who allegedly belonged to the Sufi Qadiriyya order was able to negotiate between the adversaries and the peaceful spirit of coexistence is still present in the complex.

Ethiopia is home not only to different ethnicities, but also to groups of different religions orientations such as Muslims, Christians, Jews and various local beliefs. Islam came to Ethiopia fairly early, going back to the flight of Meccan converts to the African continent when they faced persecution by the Quraysh Tribe. The first Muslim communities in Ethiopia are said to have emerged in the ninth century.

The country has been known for the peaceful coexistence of various religious groups, and the religious site of Teru Sina provides an excellent example for this.