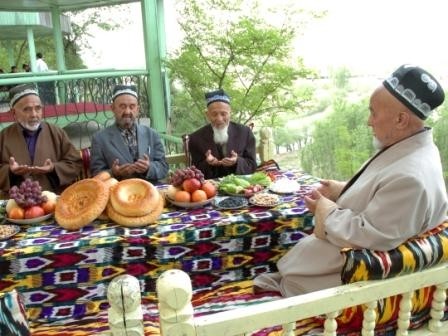 Although Islam and its religious practices, including fasting, were banned during the Soviet Union era, Uzbeks have held on to their religious and national traditions, continuing to invite neighbors, relatives and the needy to their iftar (breaking fast) tables throughout Ramadan.

After gathering for iftar, called "ağız açar" in Uzbekistan, Uzbek families are often led by the head of the family in a common prayer a few minutes before breaking their fast.

Only prepared during the holy month of Ramadan, nişalda consists of egg whites, sugar and a dried native plant root.

Nişalda is sold in markets throughout the country during Ramadan, and preparations for making it start in mountains days before the holy month begins.

To start, a native wild plant from the caryophyllus family, known as "yetmek" in the Uzbek, is collected from the surrounding mountains and dried.

In accordance with local tradition, the recipe is only passed down from father to son. During preparation, the men of the family boil the dried roots, later adding egg whites and a sugary syrup.

According to seasoned nişalda confectioner Barno Polatova, the sweet has many health benefits and can ease digestion.

Prepared with milk and butter and cooked in a clay tandoori oven, patır bread is an integral part of Uzbek tables.

Although around 100 types of bread are produced throughout the country, Uzbeks mostly prefer patır for special days, weddings and Ramadan.

Samarqand bread, a specialty found only in its namesake city, is known as one of the most delicious breads in the world due to its long-lasting flavor and is another secret Uzbek recipe passed from father to son.

Said to have originated from the famous medical scholar Ibn Sina (or Avicenna) who was born in Uzbekistan's historical city of Bukhara, Uzbek pilaf is one of the most delicious recipes in Uzbek cuisine and holds an important place in the country's food culture.

Though traditionally prepared with rice, onion, carrot and beef or lamb, the pilaf's flavor and preparation vary from region to region where cooking preferences lend unique twists to the original recipe.

Where some may add quince or sultanas, others utilize various vegetables in the dish depending on the local traditions.