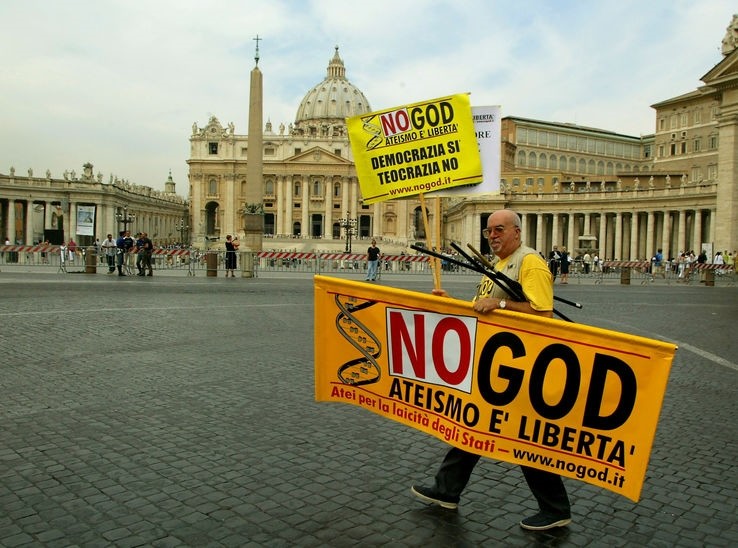 A report published in the UK's International Journal for The Psychology of Religion found there to be widespread 'prejudice' against atheists. (REUTERS Photo)
by Aug 07, 2017 12:00 am

A unusual social study has revealed that atheists are more easily suspected of vile deeds than Christians, Muslims, Hindus or Buddhists -- strikingly, even by fellow atheists, researchers said Monday.

This suggests that in an increasingly secular world, many -- including some atheists -- still hold the view that people will do bad things unless they fear punishment from all-seeing gods.

The results of the study "show that across the world, religious belief is intuitively viewed as a necessary safeguard against the temptations of grossly immoral conduct," an international team wrote in the journal Nature Human Behaviour.

And it revealed that "atheists are broadly perceived as potentially morally depraved and dangerous."

The study measured the attitudes of more than 3,000 people in 13 countries on five continents.

They ranged from "very secular" countries such as China and the Netherlands, to countries with high numbers of believers such as the United Arab Emirates, United States, and India.

The countries had populations that were either predominantly Buddhist, Christian, Hindu, Muslim or non-religious.

Participants were given a description of a fictional evildoer who tortured animals as a child, then grows up to become a teacher who murders and mutilates five homeless people.

Half of the group were asked how likely it was that the perpetrator was a religious believer, and the other half how likely that he was an atheist.

The team found that people were about twice as likely to assume that the serial killer was an atheist.

"It is striking that even atheists appear to hold the same intuitive anti-atheist bias," study co-author Will Gervais, a psychology professor at the University of Kentucky in Lexington, told AFP.

"I suspect that this stems from the prevalence of deeply entrenched pro-religious norms. Even in places that are currently quite overtly secular, people still seem to intuitively hold on to the believe that religion is a moral safeguard."

Only in Finland and New Zealand, two secular countries, did the experiment not yield conclusive evidence of anti-atheist prejudice, said the team.

Distrust of atheists was "very strong in the most highly religious states like the United States, United Arab Emirates and India," said Gervais, and lower in more secular countries.

Such research was about more than stigma alone, he added.

"In many places, atheism can be dangerous, if not fatal."

In a comment carried by the journal, Adam Cohen and Jordan Moon of the Arizona State University's psychology department, said the study marked "an important advance in explaining the prevalence of anti-atheist attitudes."