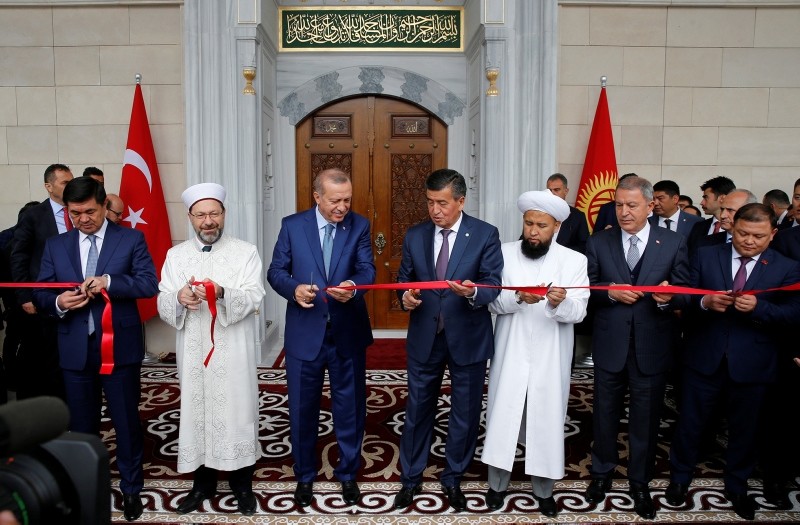 Dubbed Central Asia’s biggest, the Central Mosque of Imam Sarakhsi was built by Turkey’s religious authority and opened Sunday in the Kyrgyz capital Bishkek with Turkey and Kyrgyzstan’s presidents in attendance

The Central Mosque of Imam Sarakhsi, named after a famed Islamic scholar who lived in the 11th century, officially opened Sunday in the Kyrgyz capital Bishkek. Built by a foundation tied to Turkey's state-run Presidency of Religious Affairs (DİB), the mosque is the largest of its kind in Central Asia with the capacity to accommodate 30,000 people.

President Recep Tayyip Erdoğan, who is on an official visit to the country, joined his Kyrgyz counterpart Sooronbay Jeenbekov for the opening.

The mosque closely resembles the spectacular Kocatepe Mosque in the Turkish capital Ankara and features Turkish-Islamic and Ottoman motifs in its design. Construction for the mosque started in 2012 on 35-acres owned by the Kyrgyz religious authority.

A new landmark for the Central Asian nation's capital, the mosque has 7,500 square meters of closed space that allows 9,000 people to pray at the same time. In both the open and closed spaces, the mosque can accommodate 30,000 people at once. Along with prayer areas, the mosque has a large parking lot, classrooms, a conference hall for Islamic studies and a dining hall. The mosque has four minarets with a height of 68 meters each and three balconies on each minaret. Two huge chandeliers hang from the domes of the mosque that have been decorated with Ottoman handicrafts. A 37-meter-high large dome, which is 23 meters in diameter on the inside and 25 meters across on the outside, tops the mosque. White marble from Turkey was used in the structure as well.

Islam was introduced late to Kyrgyzstan, unlike other nations in Central Asia, and Muslims faced oppression in the Soviet era. Religion thrived after the fall of the communist regime, and the number of mosques flourished. Turkey provides assistance in religious education to Kyrgyzstan and the Diyanet Foundation that built the Imam Sarakhsi mosque also set up a Faculty of Theology in Kyrgyzstan's Osh.

Speaking at the inauguration of the mosque, Erdoğan said the place was "a complex" rather than a mosque and said he hoped it would revive "the historic bonds between Anatolia and Central Asia." "I hope this moque will be a symbol of unity and peace between brothers and sisters. We are one nation with two states and beyond that, we are one ummah [Muslim community]," Erdoğan said.

"This mosque is a splendid example of architectural understanding fusing tradition with a modern approach," he said, adding that Bishkek will be well known for this landmark "as much as Istanbul is known for the seven mosques built on its seven hills."

Speaking at the opening event, Emine Erdoğan said the venue is seen as an education center that will strengthen Kyrgyzstan-Turkey's friendship. The cultural center is part of the Kyrgyz National Library.

Aitmatov (1928-2008) is widely read and respected in Turkey. He is best known in Turkey for the 1978 film "The Girl with Red Scarf" (Selvi Boylum Al Yazmalım), which was adapted from his 1970 short novel "The Red Scarf." Erdoğan said the "Turkey" section of the library was opened in 2006 in a 60-square-meter area.

"Now, we are honored and proud to bring to the Kyrgyz National Library a section that can also be used as a cultural center," he concluded.