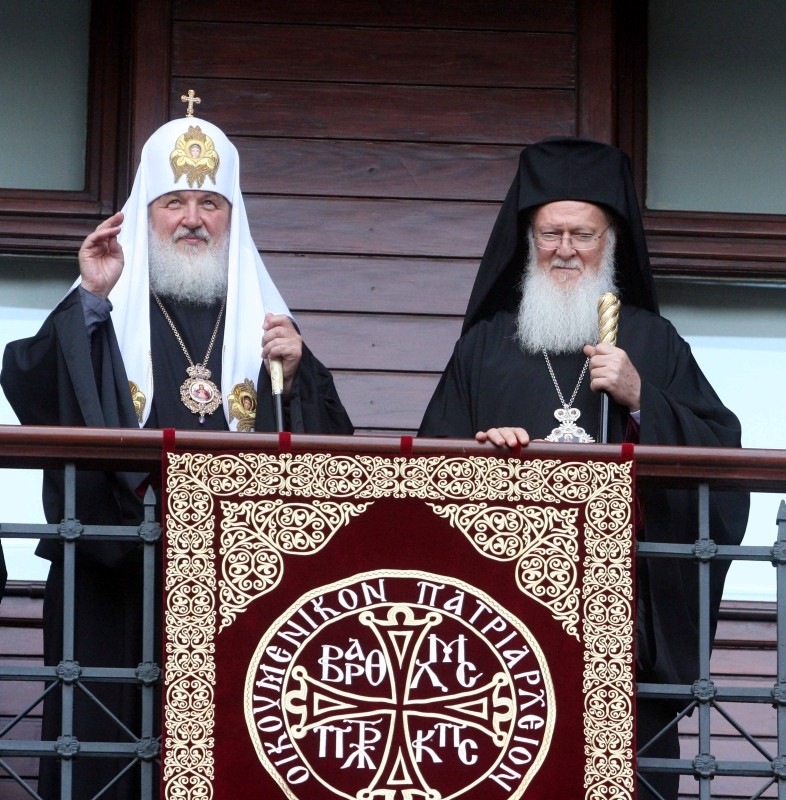 Patriarch of Moscow Kirill, left, and Patriarch of Constantinople Bartholomew lead a Sunday service at a church in Istanbul. (File Photo)
by Compiled from Wire Services
Oct 11, 2018 12:00 am

Russia opposes any steps that lead to a split in Orthodox Christianity, Kremlin spokesman Dmitry Peskov said Thursday, when asked about Ukraine's bid to establish an independent church outside Moscow's control.

"You know the position of the Russian Orthodox Church on this issue," Peskov told reporters. "And, of course, we would not want any steps taken that lead to a deep split in the Orthodox world."

Orthodox clerics led by the Patriarch of Constantinople are set to decide the fate of Ukraine's Orthodox Church, with Moscow warning Wednesday that granting it independence would provoke street protests.

The Holy Synod, which decides on key matters for the Istanbul-based Ecumenical Patriarchate, is expected to pronounce on whether to grant independence to the Ukrainian Orthodox Church this week.

This has inflamed tensions with the Patriarchate of Moscow, which technically oversees most of Ukraine's Orthodox parishes.

The Ecumenical Patriarchate of Constantinople is considered the first among equals and a spiritual leader for the world's 300 million Orthodox Christians.

The synod began Tuesday and items on its three-day agenda are not made public, but the decision on Ukraine's autocephaly, or independence, is widely expected.

The Ukrainian Church is currently split into three bodies, one technically overseen by the Patriarch of Moscow, a fact the Kiev government considers unacceptable given Russia's annexation of Crimea and the ongoing war with Moscow-backed separatists in the east.

Constantinople's Patriarch Bartholomew last month sent two envoys to Kiev, one of whom indicated in a meeting with President Petro Poroshenko that the process of granting independence, or autocephaly, was "on the finishing line."

The Moscow Patriarchate has cut ties with Constantinople over the affair, which it considers an unjust encroachment on its spiritual territory.

Ukrainian authorities and many worshippers are wary of the influence of Russian Patriarch Kirill, who has supported the annexation of Crimea from Ukraine and the separatists in the east of the country.

If the synod in Istanbul makes a favorable decision, a special assembly of Orthodox clerics in Kiev will choose the head of the new Ukrainian Orthodox Church, which could take place within 10 days.