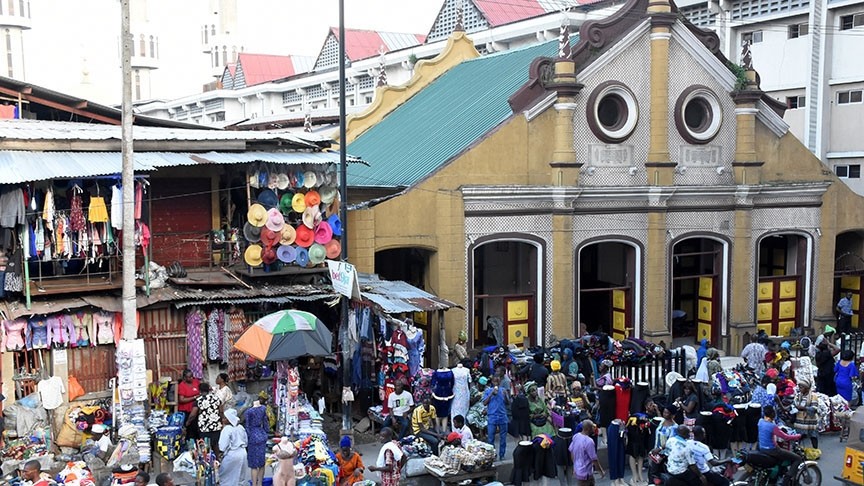 The Shitta Bey Mosque, built in Nigeria in 1894 and overseen by Sultan Abdülhamid II's special envoy at the inauguration ceremony, is known as the ‘Turkish mosque' by the local people

Built by Mohammed Shitta Bey, one of the leading businessmen at that time, in Lagos, the commercial capital of Nigeria, Shitta Bey Mosque has been surviving as Sultan Abdülhamid II's trust for 124 years.

The mosque, considered to be one of the most important historical legacies of Nigeria, has become the meeting point of Muslims in that land.

Sultan Abdülhamid II, who was invited to the opening ceremony of Shitta Bey Mosque in 1894, showed his overt support to the West African Muslims by sending his special representative to this invitation. For this reason, Shitta Bey Mosque has long been known as "Turkish Mosque" by the people of the region.

Mohammed Shitta and his family, who were granted the title "Bey" and honored with various gifts by Abdülhamid II, are among the leading Muslims of Nigeria.

Alhajj Nurudeen Alamu Shitta Bey, the grandson of Mohammed Shitta Bey, has been titled "The Seventh Leader of Muslims in Lagos" since 2012.

In an interview with Anadolu Agency (AA), Habeeballahi Taofeeq-Yushau, the imam of the mosque, stated that benevolent businessman Mohammed Shitta, who was born in Sierra Leone in 1824 and migrated to Lagos, Nigeria, sent a special invitation to Sultan Abdülhamid II for the opening ceremony of Shitta Bey Mosque, which was built in 1894 by Shitta. Taofeeq-Yushau said that Abdülhamid II himself could not come, but sent Abdullah Quilliam as his special representative to the opening of the mosque. Imam Taofeeq-Yushau continued, "Mohammed Shitta asked a representative of the Ottoman Empire to attend the opening ceremony of the mosque with the idea of contributing to the spread of Islam in the region. He sent a letter of invitation to Sultan Abdülhamid II and asked for support by means of Abdullah Quilliam, the President of the Islamic Community of Liverpool, which was founded in 1777. In response to this invitation, Sultan Abdülhamid II sent Abdullah Quilliam to Nigeria as a representative via the Ottoman Embassy in London and presented Mohammed Shitta with an Osmanieh standard, sword and Medjidie order and the related charter and also conveyed open support to West African Muslims."

Alhajj Nurudeen Alamu Shitta Bey, the grandson of Mohammad Shitta and also the "Leader of the Muslims in Lagos," noted that his grandfather Mohammed Shitta was granted title "Bey" by Abdülhamid II because of his service to Islam and Muslims in British-colonized West Africa, especially in Nigeria.

Alamu Shitta Bey added, "Ottoman Sultan Abdülhamid II gave my grandfather Mohammad Shitta Bey a variety of gifts including a silver sword and a gold medal, and honored him for his support for Muslims. Sultan Abdülhamid II honored my grandfather, who helped Muslims, and gave him the title of 'Bey' for his good work. At the same time, Muslims in Lagos called him 'the leader of Muslims.'

The family of Shitta Bey, living in Lagos, continues to use the title of "Bey" given to them by Abdülhamid II as their surname.

Taofeeq-Yushau said that they expect support from Turkey for Shitta Bey Mosque and for students educated at the mosque, adding, "We are waiting for help from the Turkish government for the restoration of the mosque. On the other hand, if the mosque is equipped with cheap and clean energy like solar energy, it will be better used."

Built by Sierra Leonean Mohammed Shitta Bey and Brazilian architect Joao Baptist Da Costa, the mosque was one of the most important mosques of West Africa during British colonialism.

Shitta Bey Mosque, which has survived to this day as the meeting point of Nigerian Muslims, was accepted as one of the nine national monuments in the country by the Nigerian National Museums and Monuments Commission on Dec. 10, 2013.

The launching of the mosque, built with Afro-Brazilian architecture, made a great contribution to the recognition of Islam in the region. The opening of Shitta Bey Mosque on July 3, 1894 was attended by the then-Lagos Governor Sir Gilbert Carter, Abdullah Quilliam, Christian leaders, foreign representatives and many Muslims.