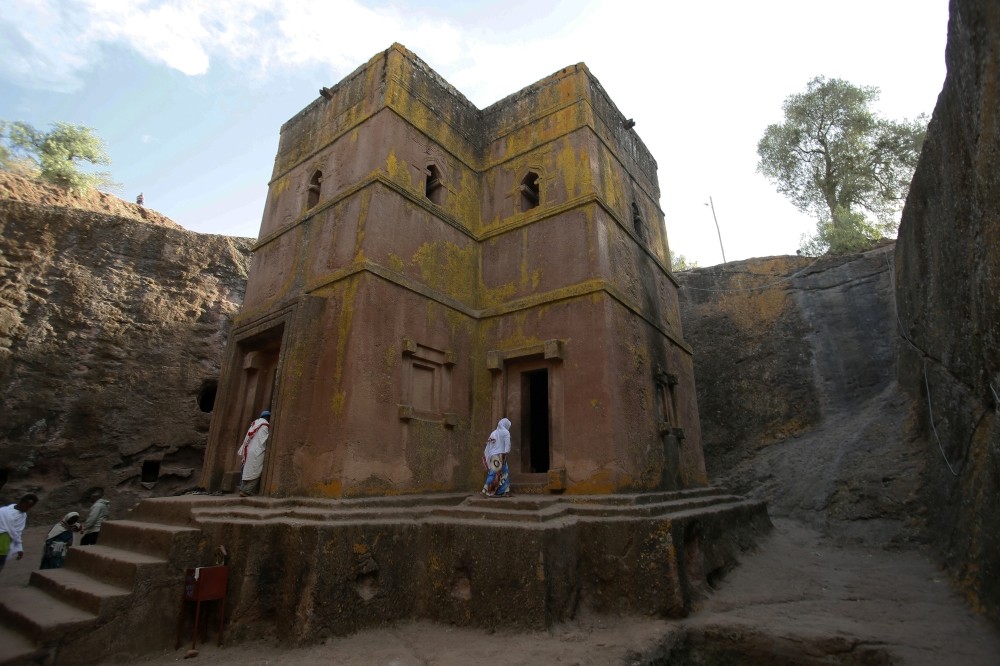 The churches of Lalibela were built by the king of Ethiopia at the end of the 12th century to set up a second Jerusalem, attracting widespread attention with their architecture and symbols

The churches of Lalibela in Ethiopia are a pieces of architecture thaty fascinate visitors with their underground constructions.

The region is called the "Jerusalem of Ethiopia" as Ethiopian King Gebre Mesqel Lalibela wanted to build a second Jerusalem in the area as the roads leading to Jerusalem were not safe.

Each of the structures, constructed underground so enemies could not recognize them, help to understand the strong religious life of Ethiopia during that time through the symbols they reflect.

The 11 rock churches in the town of Lalibela, named after the king, in Amhara region are a place where Ethiopians regularly worship and come for pilgrimage. They are flooded by tourists at every period of the year.

Lalibela is an important reflection of the Christian culture of Ethiopia, as one of the states that was introduced to Christianity at the beginning of the fourth century and accepted it as the first official religion.

Near the end of the 12th century, when King Lalibela, who reigned between 1181 and 1221, started the construction of churches, coinciding with the period after Salah ad-Din Ayyub conquered Jerusalem with his army.

The churches, which are connected to each other through tunnels and corridors and were built in different sizes, are protected by the priests in charge here.

The river passing through the city was named the Jordan River like in Palestine, while there is also a replica of Jesus' grave in the Biet Golgotha Church.

In the churches, figures of important religious men from the Ethiopian Orthodox Church in addition to Jesus and the Virgin Mary's depictions are on display.

The outer facade of the Biete Meskel Church is surrounded by 10 blunt arches, symbolic of the 10 Commandments in the Old Testament. The outer surface of the church, a swastika, Saint Andrew and Greek crosses are ranked side by side. 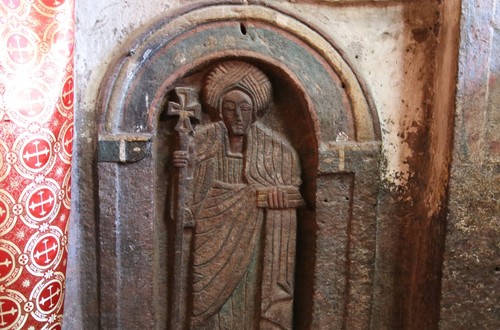 Speaking to Anadolu Agency, Golgotha Church's Priest Belay Habetamu elaborated on the history of Lalibela. Noting that Jesus Christ talked to King Lalibela by appearing only to him, Habetamu said, "Jesus ordered him to build churches by carving rocks in order to make a second Jerusalem. Jesus and angels pioneered the construction of the churches."

Referring to King Lalibela as a priest at the same time, he said, "The building of the churches were completed in 23 years."

Some of the churches in Lalibela, which have been on the World Heritage List of UNESCO since 1978 and were a cause of criticism for the government as they were not well protected, are covered by shelters to prevent rain damage.

The Saint George Church, which was built last among the 11 churches and had a church-shaped ceiling, is the most remarkable one.

Abiy Tesfakiros, who has been a guide for nearly 10 years, said that this church was built as a three-story church, inspired from Noah's ark.

Tesfakiros stressed that the church does not have any windows on the bottom story to reflect part of the ark that was under the sea. He said that the inclined part at the church's backside represents the mountain on which Noah's ark grounded.

Drawing attention to the daily life along with cultural entities, Lalibela gives the impression of being untouched for hundreds of years.

The public in Lalibela, which was the capital of Ethiopia once upon a time, continue traditional agriculture without being affected by the speed of change in the country.

The town, which has no police or security staff on the streets, arouses the feeling of being in some other country's lands not within the borders of Ethiopia.

The most important income source in the town, which is located at an altitude of nearly 2,600 meters, is tourism.

Sarah Polin, who came from Germany to see Lalibela, stated that she has never seen such work before in her life. She finds it amazing that these churches were built centuries ago.

For Polin, worshiping of Ethiopians at these churches shows how strong their religious belief is. "These churches reveal that Ethiopia has a different past."

Another place that those who visit the town also go to see is the bazaar, which is flooded by thousands of people every week. People who live in the nearby villages, and are involved in livestock and agriculture practices, come to the town every Saturday to sell their products and go shopping. The villagers, who come downhill from the mountains with their loads in groups, create huge crowds in the bazaar area of the town.

Although almost half the population in Ethiopia is Muslim, there are only about 200 Muslims living in this town with a population of nearly 50,000.

In the town there are no mosques, and Muslims only go to the center for bazaar shopping, and live in the outer areas of the town.

Yusuf Memi, a Muslim resident said that he came to Lalibela with his family in the 1980s and that he lives outside of town and works in farming.

Noting that he established a foundation so that Muslims can conduct their social work, Memi said, "We live in peace now. However, there is social pressure on us as Muslims."

Memi underlined that there are mosques outside of the town and the total Muslim population here is around 200 people.