Ramadan in Istanbul: Splendid yet humble 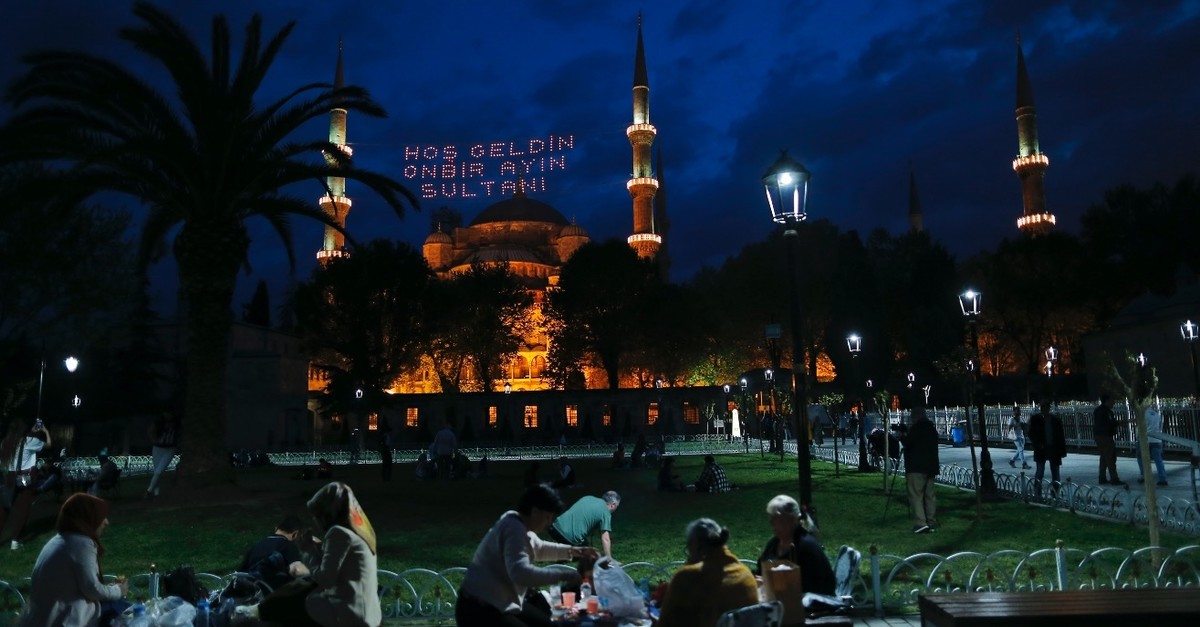 People gather together at Sultanahmet Square, Istanbul after iftar. Home to the Blue Mosque, Hagia Sophia and the Topkapu0131 Palace, Sultanahmet is one of the most frequently visited places during Ramadan.
by Miraç Tapan May 16, 2019 12:08 am

The ancient city of Istanbul is one of the best cities to spend Ramadan in all its glory and spirituality. From historic mosques that define Islamic architecture to entertainment that goes back to the time of the Ottomans, Ramadan in Istanbul is surely something you should experience

Ramadan, the month that Muslims around the world have been looking forward to for almost a year, is here and one of the best places to experience this holy month is Istanbul. Ramadan, which is one of Islam's five pillars, alongside the declaration of faith, prayer five times a day, alms giving and the pilgrimage to Mecca, is the time when Muslims fast from dawn to dusk, an exercise in self-restraint aimed at inducing empathy for the suffering of the less unfortunate.

The former Ottoman capital was home to Islam's caliphate for centuries; hence, it is certainly one of the greatest and most spiritual cities on the planet. Although the mornings are a bit quiet, Istanbul gets jazzed up at night after iftar (the fast-breaking evening meal), and Ramadan entertainment lasts until dawn. Istanbulites enjoy spreading the joy of Ramadan, and there are a few places that every Muslim should visit and experience the atmosphere it offers.

Sultanahmet and the Blue Mosque

Sultanahmet, located on the historical peninsula, is one of the most visited places during Ramadan in Istanbul. The neighborhood, which is home to both the Hagia Sophia and the Blue Mosque, was home to Ottoman sultans for centuries as well. During Ramadan, Istanbulites and people from all over Turkey and the world gather at Sultanahmet Square. While some pray at the Blue Mosque, which is adorned with blue, green and white İznik tiles, some break their fast on the lawns at the square, turning iftar into a nice picnic amid the spiritual atmosphere of Sultanahmet.

Eyüp Sultan Mosque is another place that draws quite a lot of visitors during Ramadan. It is one of the oldest and most significant mosques in Istanbul, built right after the conquest of Istanbul by the Ottoman Sultan Mehmed II. The site also features the tomb of Abu Ayyub al-Ansari, an important Islamic figure in terms of Istanbul's history, where Muslims pay their respect and pray for him throughout the year, but especially during Ramadan. The site of the mosque also hosts numerous Ramadan activities for people of all age including, Karagöz and Hacivat performances (traditional Ottoman shadow plays), live Sufi music performances and workshops. The Ramadan fun at Eyüp does not stop until suhoor, the morning meal.

The Hırka-i Şerif or Holy Cloak

Hırka-i Serif Mosque in Istanbul welcomes thousands every year during Ramadan as it is home to an ancient cloak worn by the Prophet Muhammad. The cloak is made of linen, cotton and silk and displayed inside a special box. The cloak had been entrusted to Uwais al-Qarni, who went to Medina to see the Prophet Muhammad in the seventh century but had to return to Yemen due to his mother's illness without seeing the prophet. Impressed by the story, the prophet presented his cloak to al-Qarni via companions, and he received the garment in Yemen. Al-Qarni had no children and the relic was passed down to his brother and is still under the protection of the same family. The al-Qarni family lived in southern Anatolia for centuries; however, they later migrated to Kuşadası in the Aegean region. In the 17th century, Ottoman Sultan Ahmet I asked them to bring the holy relic to Istanbul where a number of other holy relics of Islam were being preserved. After the cloak was taken to Istanbul, two keys were made, one for the sultan and one for the al-Qarni family, for the locked box that the cloak was displayed in. Traditionally, the cloak is open for display on the first Friday of every Ramadan and stays open until the end of the holy month.

Apart from being the seat of the Ottoman throne for centuries, Topkapı Palace is also home to many sacred relics, which makes the palace a popular destination for Muslims during Ramadan. When Ottoman Sultan Selim I, also known as Yavuz Sultan Selim, conquered the Arab Peninsula, the sacred relics of Islam as well as the title of caliph passed to the Ottomans. Starting with Selim's reign, these relics were brought to Istanbul, the capital of the empire, and put under protection. The collection features the Holy Mantle of the Prophet Muhammad (Hırka-i Saadet), hair from the Prophet's beard, the reliquary in which the Prophet's tooth - which was broken during the Battle of Uhud was kept and the footprints, letters, bow and sword of the Prophet. The sacred relics also include old manuscripts, early copies of the Quran and beautiful tiles belonging to key figures of Islam.