Scientists find MERS virus antibodies that may lead to treatments 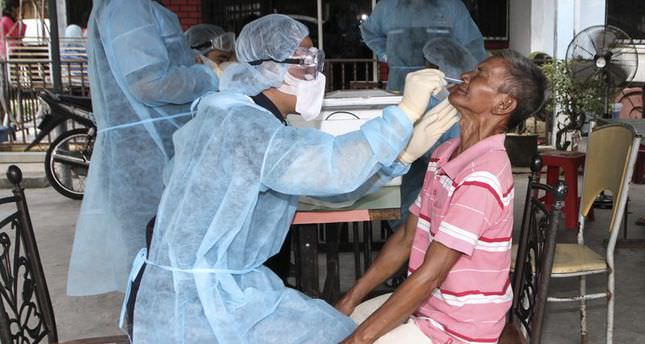 by Apr 29, 2014 12:00 am
LONDON — Scientists have found natural human antibodies to the newly-emerging Middle East Respiratory Syndrome (MERS) virus and say their discovery marks a step towards developing treatments for the often fatal disease.

MERS, a SARS-like viral disease first detected in 2012 that has caused outbreaks in the Middle East and sporadic cases around the world, has raised international alarm in recent weeks with a surge in infections and deaths in Saudi Arabia.

Saudi officials confirmed 26 more MERS cases and 10 deaths at the weekend, bringing the toll in the kingdom alone to 339 confirmed cases, of which 102 have been fatal.

There is currently no cure or vaccine for MERS - a severe respiratory disease which causes cough, fever, shortness of breath, and can lead to pneumonia and kidney failure.

But in studies published in two leading scientific journals on Monday, scientists from the United States, China and Hong Kong said they had found several so-called neutralising antibodies that were able to prevent a key part of the virus from attaching to receptors that allow it to infect human cells.

Antibodies are proteins made by the immune system that recognize foreign viruses and bacteria. A neutralising antibody is one that not only recognizes a specific virus but also prevents it from infecting host cells, eventually meaning the infection is cleared from the person or animal.

In one study in the Science Translational Medicine journal, a Chinese-led team found that two antibodies, called MERS-4 and MERS-27, were able to block cells in a lab dish from becoming infected with the MERS virus.

In a second study in the Proceedings of the National Academy of Sciences (PNAS) journal, a team from the United States said their discovery of a panel of seven neutralising antibodies offered the long-term possibility that either a vaccine or treatments could be developed to fight MERS.

The vast majority of MERS cases have been in Saudi Arabia and other countries in the Middle East, but the discovery of sporadic cases in Britain, Greece, France, Italy, Malaysia and other countries have raised concerns about the potential global spread of the disease by infected airline passengers.

Although the disease has not yet been seen in North America, "the chance of someone infected with MERS landing on U.S. shores is possible," said Wayne Marasco, an infectious disease expert at the Dana-Farber Cancer Institute who led the PNAS study.

Scientists are not yet clear precisely how the MERS virus is transmitted to people, but it has been found in bats and camels, and many experts say camels are the most likely animal reservoir from which humans are becoming infected.

The virus is similar to the one that caused Severe Acute Respiratory Syndrome (SARS) which emerged in China in 2002/2003 and killed some 800 people - around a tenth of those it infected.

The World Health Organization has said it is "concerned" about the rising number of MERS infections in Saudi Arabia. The United Nations health agency said it plans to send a team of international experts to the kingdom this week to help investigate the outbreak.