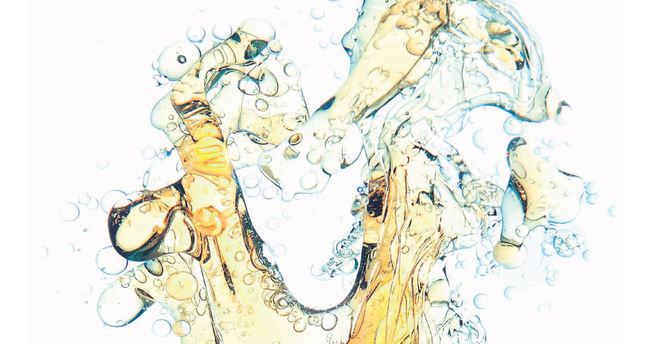 by Nur Özdil May 29, 2014 12:00 am
Used cooking oil is one of the primary domestic wastes that can harm your health as well as the environment. Not only households, but also many restaurants, hotels and food companies waste a significant amount of cooking oil. Every one liter of vegetable oil poured into the sink can potentially contaminate one million gallons of fresh water, threating natural life. If you notify "Alo Yağ Atık Hattı," the call center for used oil, officials can collect used oil with more than five liters once every week. It is then processed at certain laboratories and transformed into biodiesel. Turkey consumes about 1.5 million liters of vegetable and animal-fat-based-oil per annum. The annual vegetable oil consumption is 17.5 kg per capita, surpassing the world average. Fried and roasted foods, on the other hand, are the staples of many of Turkish cuisines. Although experts warn about the cancer risk in fried food, Turkish gourmets do not appear to give up such delicious dishes It is important not to disregard the considerable damage used oil can do to sewage systems and the ecosystem. To illustrate, cooking oil clings onto the sides of sewage pipes and can choke up the pipe over a long period of time. In addition, used oil covers the surface of underground waters, lakes and seas. It further prevents the transition of oxygen into sea, putting birds and sea creatures at risk.

Pouring fried oil into the sink may appear as a safe short-term solution for housewives, but its long-term effects can be catastrophic. Despite the risks, many are paying little notice. There is a total of 350,000 liters of used oil potential in Turkey, five percent of which is actually collected. The collected used oil per capita is about 1.8 kilograms in Germany followed by 1.6 kilograms in the U.K. The collected amount is a meager 100 grams in Turkey, though. The most terrifying thing is unlicensed used oil companies. The collected used oil can be sold to the cosmetic industry or re-transformed into cooking oil by decolorizing with magnesium silicate. In collaboration with Turkey's Ministries of Education, Forest and Environment, and Family and Social Policies, the project of "Temiz Çevre Engelsiz Hayat" (Clean Environment and Accessible Life) is being carried out to prevent pouring the used oil into the sewage system. The green barrels are placed to collect used oil at certain places like schools or mosques. After they are transformed into biodiesel, the revenues are donated to meet the necessities of handicapped people including healthcare expenses.

Biodiesel refers to a renewable fuel produced from vegetable oils such as sunflower seeds or soybean oil and also animal fats. It is made by chemically reacting lipids and alcohol producing fatty acid esters. Biodiesel is not a greenhouse gas since it is produced from agricultural plants. It can be used as a fuel if it is mixed with diesel. As an alternative to diesel fuel, biodiesel is one of the most important renewable energy resources. This renewable source can meet the energy deficit in the countries with the high-cost of petroleum and diesel fuel. Some Turkish companies are unable to invest in biodiesel due to a high special consumption tax and are forced to sell the surplus to European countries. Local companies are encouraged to produce biodiesel following the cut in the special consumption tax.
RELATED TOPICS