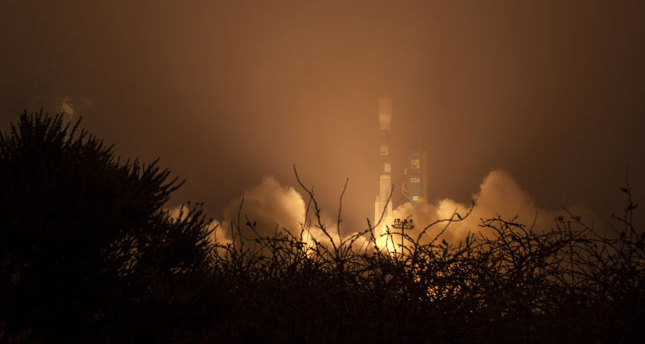 by Jul 02, 2014 12:00 am
NASA on Wednesday launched a satellite designed to track carbon dioxide, a leading greenhouse gas that is responsible for global warming.
The Orbiting Carbon Observatory-2 took off aboard a Delta 2 rocket at 2:56 am (0956 GMT) from Vandenberg Air Force Base in California.

The successful takeoff was a boon to NASA, after two previous bids to launch Earth science spacecraft -- one for carbon and another for aerosols -- failed due to rocket malfunctions in 2009 and 2011.

An attempt to launch the satellite Tuesday was also aborted at the last minute, after engineers discovered a problem with water flow to the launch pad.

Tim Dunn, NASA launch director, said the team received "very good news" that the satellite's solar arrays had deployed on schedule and described the mood in mission control as one of "pure joy."

"The spacecraft was rock-solid," he said on NASA TV, after live video showed mission control staff hugging and shaking hands.

"It all came together tonight."

The satellite is now a part of the A-Train, a constellation of five other international Earth-observing satellites.

The OCO-2 mission lasts two years and aims to provide the most detailed picture to date of natural sources of carbon dioxide -- where it is coming from and where it gets absorbed on the Earth's surface.

"The observatory will study how these sources and sinks are distributed around the globe and how they change over time," NASA said.

Human activities, like the burning of oil and coal, send nearly 40 billion tons of carbon dioxide into the atmosphere each year, according to the
US space agency.

About half of that is absorbed back into forests and the oceans.

But scientists still know little about where and how the carbon is absorbed, and how to predict the effect that future rises in carbon dioxide will have on the Earth's climate.

"For society to better manage carbon dioxide levels in our atmosphere, we need to be able to measure the natural source and sink processes," said David Crisp, OCO-2 science team leader at NASA's Jet Propulsion Laboratory (JPL) in Pasadena, California.

The OCO-2 will take 24 measurements of carbon in the atmosphere every second -- about a million per day -- but clouds are a major obstacle.

Its field of view is about one square mile (three square kilometers), so even wispy clouds can obscure its measurements.

NASA expects about 100,000 of the satellite's data snapshots from around the world daily will be sufficiently cloud-free to be useful.

"This challenging mission is both timely and important," said Michael Freilich, director of the Earth Science Division of NASA's Science Mission Directorate in Washington.

OCO-2's data will lay "the foundation for informed policy decisions on how to adapt to and reduce future climate change," he said.