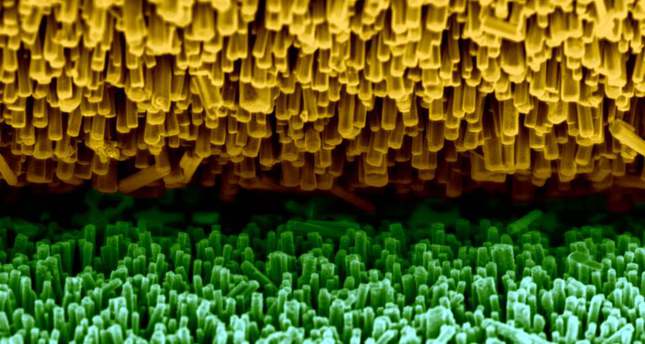 Quantum dots, which are formed from semiconductor nanocrystals, are used in a variety of technologies from smartphones to diagnosing cancer. İzmir's High Technology Institute (İYTE) recently instigated a TÜBİTAK study to produce quantum dots using kilogram quantity mass production. The researchers, who succeeded in producing quantum dots using gram quantity in only one day, are now working to produce more than one kilogram of quantum dots by the end of the year to draw the attention of the private sector to nanoscience.

Semiconductor nanocrystals measuring about 1/80,000th of the diameter of a single strand of hair are commonly used in LCD screens and to create the correct set of colors on mobile phones. These particles are made of four rarely produced nuclear components. Turkey mostly imports multipurpose quantum dots that are produced either as a liquid or a powder.

Established with the funds by Turkey's Ministry of Development, the İYTE laboratory launched the study to produce domestic quantum dots. The research team led by Professor Serdar Özçelik produced quantum dots in powder and liquid forms, and experimented their efficiency on new generation screen and cancer diagnosis technologies. They also started another project on the use of quantum dots for industrial purposes in collaboration with a private company. Özçelik said that only two U.S-based companies produce more than one kilogram of quantum dots per day, where one milligram ranges from $10 to $150 (TL 22-333). "We are talking about a material where one kilogram costs at least $10 million. Such products constitute an important part in our daily lives. The world's leading universities carry out different projects to develop and industrially produce them. We aim to produce quantum dots in larger quantities with our new reactors," he said.

Many scientific studies are being conducted on the topic of nanoscience, suggesting that companies can earn 10 or 20 times more if they invest in this field. "Our primary aim is to establish an industry facility for quantum dot production in the Izmir Technology Development Zone. We conduct feasibility studies to encourage investors," he added. The research team is working to put Turkey into a leading position in nanoscience technologies, especially since there is a general trend for Turkey to export the know-how of technologies. Özçelik said Turkish companies export know-how, but never share anything about the production process. The İYTE, however, will remain a nanotechnology designer rather than an exporter.
Last Update: Sep 16, 2014 2:08 am
RELATED TOPICS