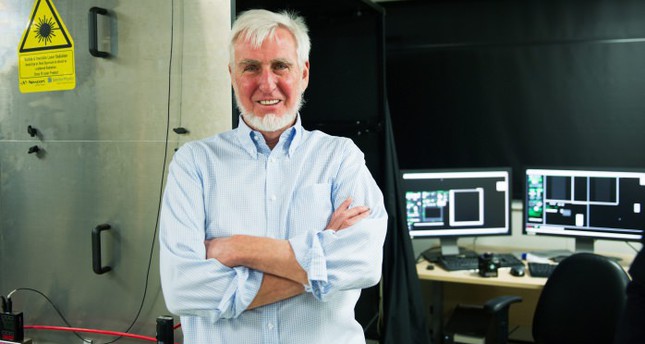 by Associated Press Oct 07, 2014 12:00 am
Neuroscientist Edvard Moser landed at Munich airport on Monday, casually dressed in a comfortable sweater for a visit to a German university. He had no idea he had just won a Nobel prize.

Then he switched on his cellphone. A virtual torrent of emails, text and voice messages and missed calls ensued, congratulating him on winning a prize that many scientists consider the greatest honor of all.

Moser won the Nobel for medicine with his wife May-Britt Moser, 51, and U.S.-British researcher John O'Keefe, 74.

In research three decades apart, the New York-born O'Keefe and the Norwegian couple discovered the GPS-like brain functions that help people map their surroundings and navigate the world.

Their breakthroughs in experiments on rats could help pave the way for a better understanding of human diseases affecting cognitive functions, like Alzheimer's, because the positioning system is believed to be similar in human brains.

"We can actually begin to investigate what goes wrong, and we've done some of this work ourselves in these cells, in animals which are models of Alzheimer's disease," O'Keefe, a dual British-American citizen, told the AP. "We can also use our understanding that there's something essentially very, very important about ... spatial memory, to design tests to see if we can pick up the first signs of Alzheimer's."

Born in Harlem and raised in the South Bronx, O'Keefe received his doctoral degree in physiological psychology at McGill University in Canada before moving to England for postdoctoral work at the University College London.

It was in London in 1971 where O'Keefe discovered the first component of the brain's positioning system. He found that a certain type of nerve cell was always activated when a rat was at a certain place in a room. Other nerve cells were activated when the rat moved to another place. He demonstrated that these so-called place cells were building up a map of the environment, not just registering visual input.

Decades later, after working in Norway and at O'Keefe's laboratory in London, May-Britt and Edvard Moser in 2005 identified another type of nerve cell the grid cell that generates a coordinate system for precise "positioning and path-finding," the Nobel Assembly said.

"I made the initial discovery over 40 years ago. It was met then with a lot of skepticism," O'Keefe said. "And then slowly over years the evidence accumulated. And I think it's a sign of recognition not only for myself and the work I did, but for the way in which the field has bloomed."

John Kubie of the SUNY Downstate Medical Center in New York said this GPS system in the brain is used in such everyday tasks as remembering where a car is parked or taking a new shortcut on the way home. Kubie also said learning about it may teach scientists more about how the brain learns and remembers, even apart from navigating.

Monday's award was the fourth time that a married couple has shared a Nobel Prize and the second time in the medicine category.

"This is crazy," an excited May-Britt Moser told the AP by telephone from the Norwegian University of Science and Technology in Trondheim, where she and her husband work.

"This is such a great honor for all of us and all the people who have worked with us and supported us," she said. "We are going to continue and hopefully do even more groundbreaking work in the future."

Edvard Moser said he finally got hold of his wife by phone after several attempts from Germany, where he was visiting the Max Planck Institute outside Munich.

"It is fantastic. This is something we have done and got together. It is really a joint work," he told AP. "Not only are we two people but we are complementary as well."

He was born on Norway's western coastal town of Aalesund while his wife hails from Fosnavaag, a smaller town on an island 40 kilometers (25 miles) to the southwest, They became a couple 30 years ago in Oslo when they were studying neurophysiology together.

Edvard Moser said their daughters, 23 and 19, are also interested in science, with one studying medicine and the other chemistry.

The Nobel Assembly said the laureates' discoveries marked a shift in scientists' understanding of how specialized cells work together to perform complex cognitive tasks. They have also opened new avenues for understanding cognitive functions such as memory, thinking and planning.

"Thanks to our grid and place cells, we don't have to walk around with a map to find our way each time we visit a city, because we have that map in our head," said Juleen Zierath, chair of the medicine prize committee.

Half the Nobel prize money of 8 million Swedish kronor (about $1.1 million) goes to O'Keefe and the other half to the Mosers. Each winner also receives a diploma and gold medal.

The Nobel Prizes will be handed out on Dec. 10, the anniversary of prize founder Alfred Nobel's death in 1896.

This year's Nobel announcements continue with the physics award on Tuesday, followed by chemistry, literature and peace later this week. The economics prize will be announced next Monday.