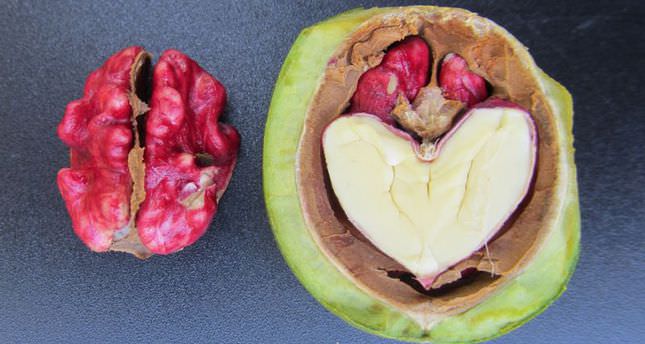 by Daily Sabah Oct 13, 2014 12:00 am
Assistant Professor Mehmet Sütyemez of Kahramanmaraş Sütçü İmam University's (KSÜ) Agricultural Faculty, in remarks to an Anadolu Agency (AA) reporter, said they are proud to have produced the first red walnut in Turkey.

He pointed out that Kahramanmaraş is a leading province in Turkey regarding walnut production and stated that they had previously rehabilitated and registered four walnut species.

He further stated that they are trying to introduce new species to Turkey besides the rehabilitation of walnuts. He said they had achieved production of a red walnut and successfully concluded their study after rehabilitating the species. "We were able to develop a new walnut species genotype," he stated. Sütyemez further noted that the red walnut's taste is not different from other species.

He said that the red walnut would arouse interest in the public with its color, adding, "God willing, this new development will be beneficial for both Turkey and the world."

He stated they would begin producing this new walnut species and build gardens in the upcoming year. Named "KSÜ," it is the first red walnut in Turkey and second in the world. Istanbul / Sabah