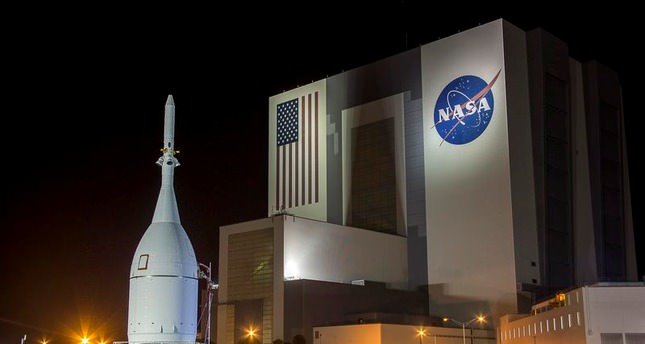 by Dec 02, 2014 12:00 am
NASA's multi-billion dollar Orion capsule is poised for its first test launch Thursday, in a demonstration flight that aims to propel it higher than any spacecraft meant to carry humans in 40 years.

After launching from Cape Canaveral, Florida atop a powerful Delta IV rocket at 7:05 am (1205 GMT), the unmanned spacecraft should circle the Earth twice and reach a height of 3,600 miles (5,800 kilometers), more than 15 times the altitude of the orbiting International Space Station.
The crew capsule is scheduled to make a splash landing in the Pacific Ocean about four and a half hours later.

The weather forecast for launch was 60 percent favorable as of Monday, with the potential for showers and high winds raising some doubt about liftoff. The launch window stays open for two hours and 39 minutes.

The Orion space capsule was initially supposed to carry astronauts to the Moon as part of NASA's Constellation program, which was cancelled by President Barack Obama in 2010.

NASA rescued the design for the capsule - on which it spent $4.7 billion from 2005 to 2009 - and said it could easily be repurposed to send people to an asteroid or Mars in the coming decades.

A successful test flight would be a boon to the US space program, which has been unable to send astronauts to orbit since the retirement of the space shuttle program in 2011.

It would also settle some nerves after two recent commercial space flight disasters - the explosion of an Orbital Sciences Antares rocket in late October on its way to the ISS, and just days later, the crash of Virgin SpaceShipTwo that killed one of two pilots.

The Orion test flight is "absolutely the biggest thing that this agency is going to do this year," said NASA deputy associate administrator for exploration systems development, William Hill.

Orion would be the first spacecraft of its kind to travel so far since the Apollo missions to the Moon in the 1960s and 70s.

The return will closely simulate a journey back from the Moon.

Critics of the Orion project - which also involves the construction of the world's most powerful rockets, Space Launch System (SLS), to propel it into space - point to expense and lack of focus as key problems.

The latest estimate by NASA pegs the development cost for SLS/Orion at between $19 billion and $22 billion through 2021, up from a prior estimate of $18 billion in 2011.

"Almost everyone in the space industry understands that this is an extremely disingenuous low-ball estimate," said space analyst Marco Caceres of the Teal Group.

The rising costs add to what Caceres described as the "painful fact that the rocket doesn't actually have a mission."

The first demonstration flight of Orion with people on board is scheduled for 2021. After that, its precise destination remains unknown.

Future missions could include a trip to lasso an asteroid as well as a journey to Mars by the 2030s, though no firm plans have been set or budgeted by NASA.