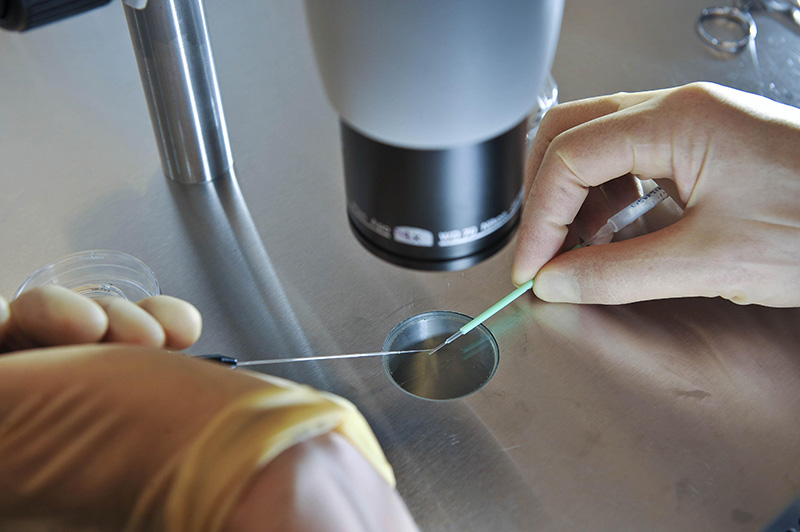 | Photo: AP
by Daily Sabah with Wires Mar 16, 2015 12:00 am
American scientists have attempted to modify the DNA of human egg cells using a new gene-editing technique that could eliminate inherited diseases from subsequent generations of affected families, according to The Independent.

Researches at Harvard University took ovary cells from a woman with inherited ovarian cancer to see if they could produce IVF (In Vitro Fertilization) embryos free of the disease. The team used a new gene-editing technique called Crispr on ovarian tissue cultured in the lab to see if they could correct the defective BRAC1 gene that relates to inherited breast and ovarian cancers. The results are yet to be published.

However, the development of a simple gene-editing technique which can alter human DNA has raised the prospect of it being used in the future to help couples who want to have children free of family mutations.

Harvard geneticist George Church said the work was purely experimental, and they had no intention of fertilizing the eggs or transplanting them into a woman, The Independent reported. Although the work in his laboratory is pioneering, Professor Church is one of several experts who believe that there should be stricter controls on scientists who may be tempted to use Crispr for human germ-line therapy on IVF embryos.

Dangers and the ethical aspect of the issue are still a matter of debate. A comment article in Nature this week by leading academics, including US-based geneticist Fyodor Urnov, a pioneer of gene editing, warns of the danger of moving too fast, The Independent reported.