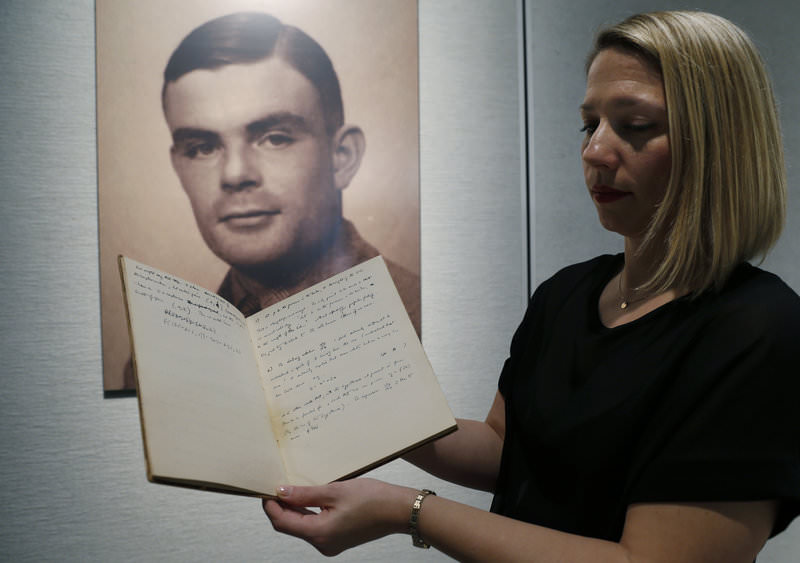 Cassandra Hatton, the director of the history of science at Bonhams auction house, shows the notebook of British mathematician and pioneer in computer science Alan Turing, in front of his portrait (Reuters Photo)
by Daily Sabah with Agencies Apr 14, 2015 12:00 am
A key handwritten notebook by British mathematician and World War II code-breaking genius Alan Turing brought more than $1 million at auction in New York on Monday.

The sale of the recently discovered notebook, which was brought for $1,025,000, comes at a time of enormous interest in Turing's life and work generated by Oscar-winning movie "The Imitation Game", starring Benedict Cumberbatch in the role of Turing.
Turing's notebook dates from 1942, when he and his team of cryptanalysts were at Britain's World War II code and cypher school Bletchley Park.

The sale also included a working German Enigma enciphering machine. The three-rotor device, manufactured for the German military in July 1944, sold for $269,000, smashing pre-sale estimates of $140,000-180,000.

Turing was prosecuted for being homosexual at a time when it was illegal in Britain. He was convicted of indecency in 1952 and agreed to undergo hormone treatment in a bid to eliminate his homosexuality as an alternative to imprisonment.

He died in 1954 of cyanide poisoning. His death was ruled a suicide although his family and friends believed it might have been accidental. He was only officially pardoned by Queen Elizabeth II in 2013, six decades after his death.

The notebook was among the papers he left in his will to friend and fellow mathematician Robin Gandy. Gandy gave the papers to The Archive Centre at King's College in Cambridge in 1977. But he kept the notebook, using its blank pages for writing down his dreams at the request of his psychiatrist.

The notebook remained in Gandy's possession until he died in 1995, and Bonhams describes his entries as highly personal.

Bonhams said the buyer wished to remain anonymous. Part of the proceeds will be donated to charity.
Last Update: Apr 14, 2015 5:59 pm
RELATED TOPICS