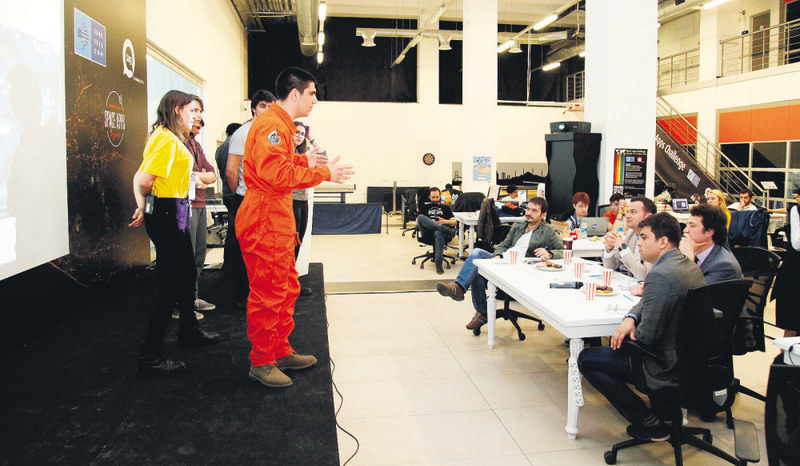 by daily sabah Apr 17, 2015 12:00 am
Initiated by NASA to discover talented individuals in space sciences from around the world, the International Space Apps Challenge has come to an end after a 48-hour technological ideas marathon. Representatives of the three teams that won the local Turkish challenge will get the chance to visit Silicon Valley in the U.S. The event, which was organized in Istanbul for the second time, took place in 60 countries and 130 cities simultaneously. Hosted at the Istanbul Technical University's (İTÜ) Maslak Campus, the event saw various competing creative projects.

Fourteen projects were presented at the Turkish leg of the organization, sponsored by Türk Telekom Group and TAG-Tek Araba Gidelim. The three teams that presented their projects were deemed worthy to represent Turkey at NASA's global challenge, which is held to encourage people to work together to overcome difficulties, create new space technologies and improve mankind by developing technological applications.

At the end of the 48-hour-long marathon, the participants presented their projects to a jury composed of academics, entrepreneurs and scientists such as the Vice-General Manager of Türk Telekom Group Strategy and Business Development Hakan Dursun, the Vice-General Manager of Türk Telekom Group Work Planning Fırat Yaman Er, the Founder and CEO of Vivense Kemal Erol, Associate Professor Enis Kayış of the Department of Industrial Engineering at Özyeğin University and Associate Professor Mehmet Güray Güler of Yıldız Technical University.

The ASE Team, which participated in the challenge from Samsun, came in first in the Best Use of Hardware category with their project "Hezadron," while the Fuego Team from İTÜ ranked first in the Best Mission Concept category with their project "Beeg Idea." The Kabataş Erkek High School Cryptex Team was chosen as the overall winner of the challenge by the jury with their project named "Christopher." These three teams will represent Turkey and get the chance to compete with winners from other cities around the world. Furthermore, the teams will visit Silicon Valley as the guests of Türk Telekom. If the creative team of İTÜ comes first in any category in the global challenge, they will win the special prize of a TAG-Tek Araba Gidelim worth TL 10,000 ($3,696).
RELATED TOPICS