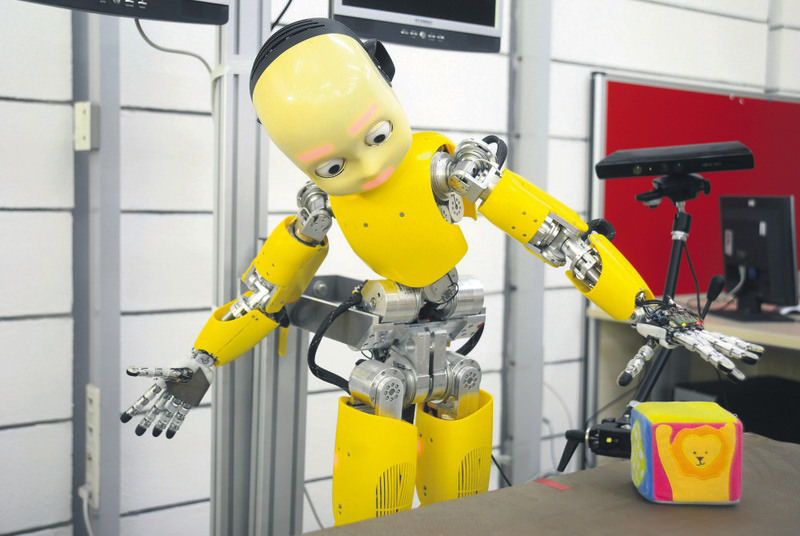 by Anadolu Agency Apr 23, 2015 12:00 am
The robot named iCub, which was brought to Turkey four years ago, was designed to learn how to communicate with humans after experiencing a development process just like a baby. The robot has finally gained the mental and motor skills of a little boy, and he can make connections between nouns, verbs and prepositions as well as speak.

Speaking on the subject, Assistant Professor Sinan Kalkan of the Department of Computer Engineering at Middle East Technical University (ODTÜ) said the most advanced research topic on robotics around the world is the study of androids.

iCub was brought to ODTÜ KOVAN Laboratories about four years ago with the initiative of Kalkan's colleague, Associate Professor Erol Şahin, as a part of the "RobotCub" Project conducted by the E.U. Sixth Framework Program. Moreover, there are only 30 copies of the 250,000-euro robot in nine countries.

According to Kalkan, when the robot child was brought to the laboratory, it had only electric circuits and was not able to communicate with people. Stressing that the robot has been equipped with various skills over the last four years thanks to the hard work of Turkish scientists, Kalkan said, "We are trying to help the robot gain skills just like a baby who learns things by slowly interacting with its environment. First, we teach simple concepts, and then move on to more complicated information. Thus, we are able to transfer human intelligence to a robot."

The robot, which is 140 centimeters tall and weighs 22 kilograms, has the limited intelligence of a three-and-a-half-year-old child. It can grab objects and understand what they are by using its artificial sense of touch and sound data. "For example, when you say, 'give me the round and soft object,' it can separate objects from each other and give us the one that we ask for. If there is not an object with these features it says, 'but, there is not such an object,' or 'I cannot reach it as it is too far away,'" Kalkan explained.

Emphasizing the robot can speak both Turkish and English, he said, "The robot can give information about the objects it senses in two languages." The robot is able to grab objects thanks to hundreds of sensors on its hand and wrist joints. It has moving cameras in its eyes and an operating system in his head. The robot processes the images and the senses through the computer in its head and moves like a human.

iCub, which displayed some of the things it can do thanks to its artificial intelligence, was able to recognize a cup on the table among many other objects. When it was asked to give another object that was not on the table, it understood that it was a misleading question and said the object was not there.
Last Update: Apr 23, 2015 11:42 pm
RELATED TOPICS