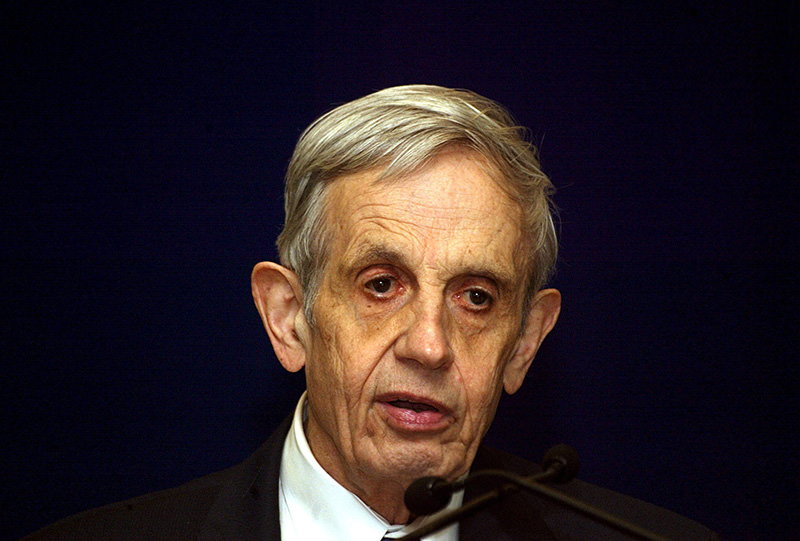 A file picture dated 14 February 2007 of Noble Laureate John Nash speaking on 'Global Games and Globalization' during a function in New Delhi, India (EPA Photo)
by Daily Sabah with Agencies May 24, 2015 12:00 am
John Nash, the US mathematician whose life and struggles with schizophrenia was the subject of the Oscar-winning movie A Beautiful Mind, is dead after a weekend car crash, US police confirmed Sunday.

New Jersey police told dpa that Nash, 86, and his wife, Alicia, 82, were dead after a car crash. They had been in a taxi traveling along the New Jersey Turnpike when the driver lost control, reported the New Jersey Star-Ledger. Police said the couple was ejected from the car, which has led to speculation they were not wearing seatbelts.

The Nobel Prize-winning mathematician was on his way home from the airport after returning from a trip to Norway, where he had accepted the Abel Prize, which is given for achievements in mathematics.

Nash, who won the Nobel Prize for Economics in 1994, was best known in the field of mathematics for his work in game theory. However, his struggles with schizophrenia were the basis of the movie A Beautiful Mind, which provided him with an even wider measure of fame.

Nash had visited Istanbul in 2012 to attend the fourth World Congress of the Game Theory Society in Bilgi University in which other Nobel Prize winner scientists such as Eric Maskin, Reinhard Selten and Roger Myerson had also attended.
Last Update: May 24, 2015 5:43 pm
RELATED TOPICS