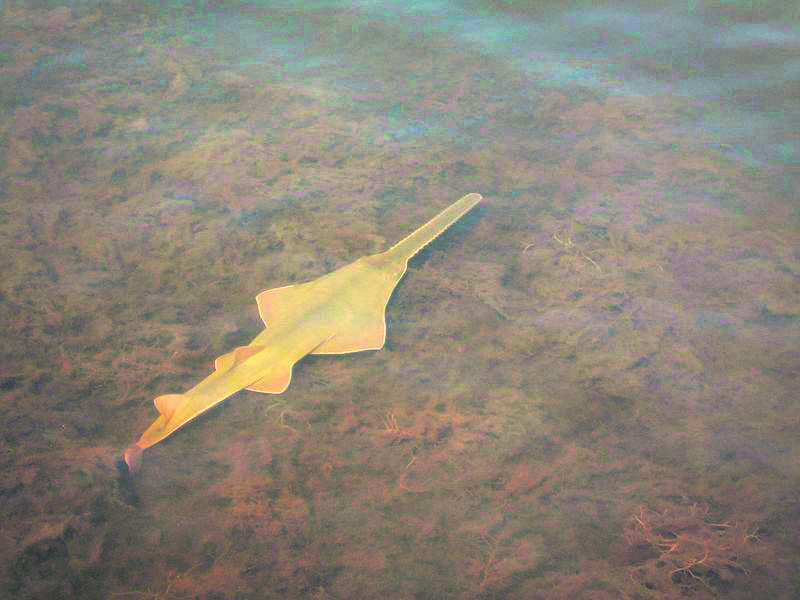 by Jun 05, 2015 12:00 am
Scientists have documented in Florida a series of "virgin births," reproduction without mating, in a critically endangered sawfish species pushed to the brink of extinction by over-fishing and habitat destruction.

The scientists said on Monday it marks the first time the phenomenon called parthenogenesis has been seen in a vertebrate in the wild. Some females may be resorting to asexual reproduction because smalltooth sawfish numbers are so low mating opportunities may not exist, they said.

"There have been a number of cases in reptiles, birds and sharks of 'virgin birth' in captivity," Stony Brook University marine biologist Andrew Fields said. "This raises many questions about how common this mode of reproduction is in the wild." In parthenogenesis, a female's egg cell can develop into a baby without being fertilized by a male's sperm cell. In making an egg cell, a precursor cell divides into four cells. The one that eventually becomes the egg cell retains key cellular structures and the gel-like cytoplasm. The other three hold extra genetic material. In parthenogenesis, one of those cells essentially acts as a sperm cell and fuses with the egg. This "fertilized" egg possesses about half the mother's genetic diversity, a trait allowing parthenogenesis to be detected through genetic testing.

Smalltooth sawfish are born and live for about three years in southwest Florida estuaries before moving into ocean coastal habitats.

The researchers were investigating sawfish inbreeding when they discovered seven, all healthy, born via parthenogenesis, about 3 percent of those examined.

"It really surprised us," said Kevin Feldheim, manager of the Pritzker Laboratory for Molecular Systematics and Evolution at Chicago's Field Museum. "It is possible that numbers are so low that females have a hard time finding mates. In such a situation, parthenogenesis can be used as a last-ditch effort for a female to pass on her genes."

Florida Fish and Wildlife Conservation Commission fish biologist Gregg Poulakis said the sawfish came from the Peace and Caloosahatchee rivers, which feed the Charlotte Harbor estuary system. Sawfish, a type of ray, have a flattened shark-shaped body and a long, flat snout with pairs of teeth on the side used to find, stun and kill prey. They grow up to 18 feet (5.5 meters) long. Their population collapse follows habitat loss and "unintentional" over-fishing, being caught in nets targeting other species. They received U.S. federal endangered species protection in 2003. The research appears in the journal Current Biology.