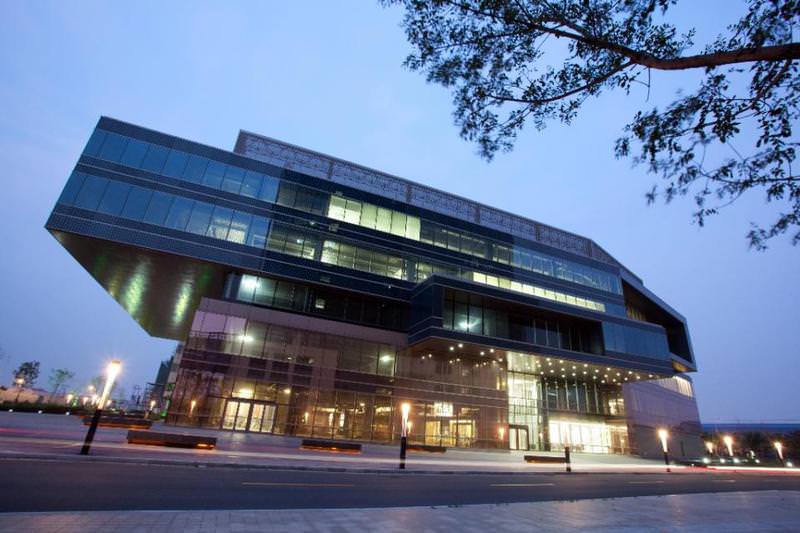 Boyalife Group and its partners are building a giant cloning factory in Tianjin by 2020. (AFP Photo)
by French Press Agency - AFP
Dec 01, 2015 12:00 am
The Chinese scientist behind the world's biggest cloning factory has technology advanced enough to replicate humans, he told AFP, and is only holding off for fear of the public reaction.

Boyalife Group and its partners are building the giant plant in the northern Chinese port of Tianjin, where it is due to go into production within the next seven months and aims for an output of one million cloned cows a year by 2020.

But cattle are only the beginning of chief executive Xu Xiaochun's ambitions.

In the factory pipeline are also thoroughbred racehorses, as well as pet and police dogs, specialised in searching and sniffing.

Boyalife is already working with its South Korean partner Sooam and the Chinese Academy of Sciences to improve primate cloning capacity to create better test animals for disease research.

And it is a short biological step from monkeys to humans -- potentially raising a host of moral and ethical controversies.

"The technology is already there," Xu said. "If this is allowed, I don't think there are other companies better than Boyalife that make better technology."

The firm does not currently engage in human cloning activities, Xu said, adding that it has to be "self-restrained" because of possible adverse reaction.

But social values can change, he pointed out, citing changing views of homosexuality and suggesting that in time humans could have more choices about their own reproduction.

"Unfortunately, currently, the only way to have a child is to have it be half its mum, half its dad," he said.

"Maybe in the future you have three choices instead of one," he went on. "You either have fifty-fifty, or you have a choice of having the genetics 100 percent from Daddy or 100 percent from Mummy. This is only a choice."

Xu, 44, went to university in Canada and the US, and has previously worked for US pharmaceutical giant Pfizer, and in drug development.

Presenting cloning as a safeguard of biodiversity, the Tianjin facility will house a gene bank capable of holding up to approximately five million cell samples frozen in liquid nitrogen -– a catalogue of the world's endangered species for future regeneration.

Boyalife's South Korean partner Sooam is already working on a project to bring the woolly mammoth back from extinction by cloning cells preserved for thousands of years in the Siberian permafrost.

Sooam founder Hwang Woo-Suk was a national hero with his own postage stamp before being embroiled in controversy a decade ago after his claims to be the first in the world to clone a human embryo were discredited.

Hwang, who created Snuppy, the world's first cloned dog, in 2005, lost his university position, had two major papers retracted, and was accused of crimes ranging from violation of bioethics laws to embezzling research funds.

Earlier this year he was quoted in South Korea's Dong-A Ilbo newspaper saying that his firm was planning a cloning joint venture in China "because of South Korea's bioethics law that prohibits the use of human eggs".

"We have decided to locate the facilities in China in case we enter the phase of applying the technology to human bodies," he was quoted as saying.

For now, Xu seeks to become the world's first purveyor of "cloned" beef, breeding genetically identical super-cattle that he promises will taste like Kobe and allow butchers to "slaughter less and produce more" to meet the demands of China's booming middle class.

Cloning differs from genetic modification, but its application to animals would enable the firm to homogenise its output.

"Everything in the supermarket looks good –- it's almost all shiny, good-looking, and uniformly shaped. For animals, we weren't able to do that in the past. But with our cloning factory, we choose to do so now," Xu said.

"Remember, this is a food. We want it to be uniform, very consistent, very premium quality," he added.

There is controversy over whether cloned beef is safe for human consumption -- research by the US Food and Drug Adminstration says that it is, but the European parliament has backed a ban on cloned animals and products in the food chain.

The UN's Food and Agriculture Organization has yet to review the issue.

Han Lanzhi, a GMO safety specialist at the Chinese Academy of Agricultural Sciences, said Boyalife's claims about the safety, scope and timeline of their operations were alarming -- and implausible.

"To get approval for the safety of cloned animals would be a very drawn-out process, so when I heard this news, I felt very surprised," she said.

"There must be strong regulation because as a company pursuing its own interests, they could very easily do other things in the future," she added.

Xu sought to be reassuring, telling AFP: "We want the public to see that cloning is really not that crazy, that scientists aren't weird, dressed in lab coats, hiding behind a sealed door doing weird experiments."
Last Update: Dec 01, 2015 7:45 pm