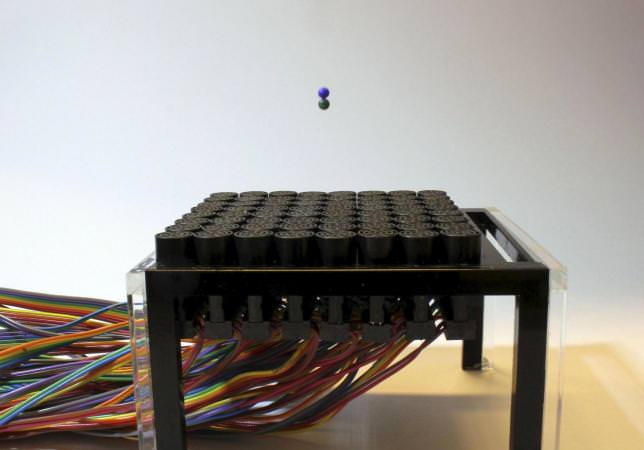 A team from the universities of Bristol and Sussex, in conjunction with Ultrahaptics, a spin-off set up by Sussex Professor of Informatics, Sriram Subramanian, used high-amplitude soundwaves to generate an acoustic hologram that can pick up and move small objects.

Their research, led by PhD student Asier Marzo, was published in Nature Communications in October.

The device allows the manipulation of small spherical objects in mid-air by individually controlling 64 miniature loudspeakers to generate the acoustic hologram without physical contact. The loudspeakers are controlled at a frequency of 40 kilohertz (Khz), creating high-pitched and high-intensity sound waves to levitate spherical, expanded polystyrene beads of up to 4 millimeters in diameter.

The tractor beam surrounds the balls with high-intensity sound to create a force field that can keep the beads in place, move them or rotate them.

"What we have here is what we call an acoustic hologram - or what we have called an acoustic hologram because I think it's the first time it has been used," Marzo told Reuters. "A traditional hologram it's made of light and you have flat surfaces. Nonetheless it creates a 3D light field. If you remember Star Wars you can see the robot R2D2 and it's broadcasting a 3D spaceship, even from a flat surface. So this is exactly the same; we have a flat surface and we are creating a 3D acoustic field that can surround the particle."

The concept of tractor beams grabbing and lifting objects was created by science-fiction writers, but in recent years various teams of scientists have sought to create an actual version.

Previous examples of tractor beam technology have involved using light. According to Marzo, "I think the only real tractor beam that has been achieved before was with light; it was a very powerful focalized laser and it was able to trap the particles and move it towards the laser, towards the source. However, the particles had to be very small - like around the micrometers and you need to pump a lot of power into the laser. So this is the real first acoustic tractor beam and it's nice because acoustic tractor beam, acoustic manipulation, needs much less power and it's more powerful in terms of the materials that it can trap."

Marzo believes the new technique could be developed for many applications. The team is certainly thinking big.

He said: "Basically one of our future projects aims at levitating something that's like a beachball ten meters away and we think this could be very useful for zero gravity environments, like under water or in the International Space Station. If you check videos everything is floating around, water the nuts, screws, everything is adrift uncontrollably, so if you can create fake gravity with this device it would help a lot the astronauts."

A sonic production line could potentially transport delicate objects and assemble them, without physical contact. But the Bristol researcher's main goal is the revolution of surgery, with a miniature tractor beam transporting drug capsules or microsurgical instruments through living tissue.

The team has used three different shapes of acoustic force fields to work as tractor beams. Firstly, an acoustic force field that resembles a pair of fingers or tweezers; the second an acoustic vortex in which objects become trapped at the core, while the third they describe as a "high-intensity cage" that surrounds the objects and holds them in place from all sides. Each system consumes just nine Watts of power.
Last Update: Dec 03, 2015 11:24 pm