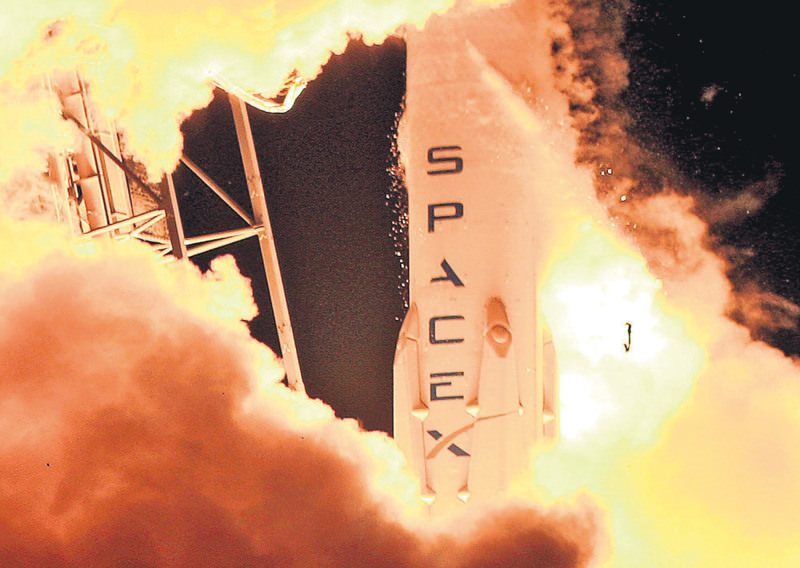 SpaceX successfully landed its powerful Falcon 9 rocket Monday for the first time, a major milestone in the drive to cut costs and waste by making rockets as reusable as airplanes. Its engines burning bright orange against the dark night sky, the Falcon 9 made a graceful arc back to Earth and touched down upright at Cape Canaveral, Florida, minutes after launching a payload of satellites to orbit, video images showed.

"The Falcon has landed," a commentator said above the screams and cheers of people gathered at SpaceX headquarters in Hawthorne, California. SpaceX, headed by Internet tycoon Elon Musk, is striving to revolutionize the rocket industry, which currently loses many millions of dollars in jettisoned machinery and sophisticated rocket components after each launch.

"I still can't quite believe it," Musk said in a teleconference after the landing. "I think this is a revolutionary moment. No one has ever brought an orbital class booster back intact." Previous attempts to land the Falcon 9's first stage on a floating ocean platform have failed - with the rocket either colliding with the autonomous drone ship or tipping over. But this time, video images on SpaceX's live webcast showed the tall, white portion of the rocket -- known as the first stage - appearing to settle down firmly and stick the landing. The rocket reached a height of 200 kilometers before heading back to Earth and touching down at a former U.S. Air Force rocket and missile testing range that was last used in 1978.

Video images were cut off within seconds of the landing, and the SpaceX live webcast returned to its commentators, who described the successful deployment of the rocket's payload of 11 satellites for ORBCOMM, a global communications company. The U.S. space agency NASA applauded the feat. "Congratulations @SpaceX on your successful vertical landing of the first stage back on Earth!" NASA said in a tweet.

The stakes were high for SpaceX, which has a $1.6 billion contract with NASA to supply the astronauts living at the International Space Station (ISS) over numerous back-and-forth trips with its Dragon cargo ship. Just six months ago, a devastating explosion - caused by a faulty strut - destroyed the Falcon 9 about two minutes after launch, along with hundreds of millions of dollars in cargo and equipment bound for the ISS.

The company fixed that problem, added numerous improvements and also made the newest version of the Falcon 9 about 30 percent more powerful than previous iterations, Musk said. Adding to the competitive nature of the commercial space industry, Amazon founder Jeff Bezos's rocket company Blue Origin announced last month it had successfully landed its New Shepard rocket after a suborbital flight.

Analysts have pointed out that although New Shepard was first, that SpaceX's feat would be harder to accomplish because the Falcon 9 flies higher in altitude. "Because SpaceX's vehicle was designed to place a constellation of satellites in orbit, the Falcon 9's first stage flew at significantly greater speeds and more than double the altitude of what New Shepherd reached last month," the Commercial Spaceflight Federation said in a statement.

It called the landing an "incredible achievement" in an industry that is seeking to drive down costs and make spaceflight cheaper and more accessible to tourists and adventurers. Canadian astronaut Chris Hadfield added his congratulations. "That was a hard landing to stick. Opens a brand new door to space travel. I look forward to the details," he wrote on Twitter.
RELATED TOPICS