US researchers prove Albert Einstein's theory about ripples in space-time 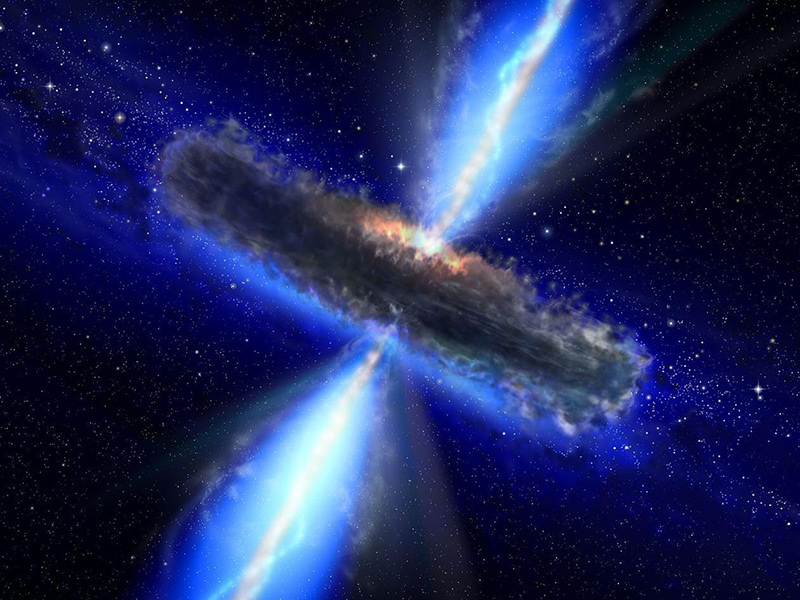 This file photo taken on March 13, 2012 shows an artist's concept illustrates a quasar, or feeding black hole. (AFP Photo)
by Compiled from Wire Services Feb 11, 2016 12:00 am
Scientists say they have finally detected gravitational waves the ripples in the fabric of space-time that Einstein predicted a century ago.

The announcement has electrified the world of physics and astronomy. Scientists say the finding opens a new way of observing the cosmos.

For many years, scientists have had indirect evidence of the existence of gravitational waves rippling across the universe.

But now, an all-star international team of astrophysicists using an excruciatingly sensitive, $1.1 billion instrument has actually detected one of these waves from the distant crash of two black holes.

When two black holes collided some 1.3 billion years ago, the joining of those two great masses sent forth a wobble that hurtled through space and arrived at Earth on September 14, 2015, when it was picked up sophisticated, US-based instruments, researchers announced at a press conference in the US capital.

One theorist says the feat ranks along Galileo taking up a telescope and looking at the planets.

A century ago, Albert Einstein hypothesized the existence of gravitational waves, small ripples in space and time that dash across the universe at the speed of light.

But scientists have been able to find only indirect evidence of their existence. On Thursday, at a news conference called by the U.S. National Science Foundation, researchers may announce at long last direct observations of the elusive waves.

Such a discovery would represent a scientific landmark, opening the door to an entirely new way to observe the cosmos and unlock secrets about the early universe and mysterious objects like black holes and neutron stars.

Scientists from the California Institute of Technology, the Massachusetts Institute of Technology and the LIGO Scientific Collaboration are set to make what they bill as a "status report" on Thursday on the quest to detect gravitational waves. It is widely expected they will announce they have achieved their goal.

"Let's say this: The first discovery of gravitational waves is a Nobel Prize-winning venture," said physicist Bruce Allen of the Max Planck Institute for Gravitational Physics in Hannover, Germany.

"I believe in the next decade, our view of the universe is going to change really quite dramatically," added Abhay Ashtekar, director of Penn State University's Institute for Gravitation and the Cosmos.

Einstein in 1916 proposed the existence of these waves as an outgrowth of his ground-breaking general theory of relativity.

"Gravitational waves are literally ripples in the curvature of space-time that are caused by collisions of heavy and compact objects like black holes and neutron stars," Ashtekar said.

"They're waves, like light or any other kind of electromagnetic radiation, except here what's 'waving' is space and time itself," said NASA astrophysicist Ira Thorpe, with the Goddard Space Flight Center in Maryland. "You get radiation, basically light, when you move some sort of charged particle. When you're moving masses, you get gravitational waves."

Scientists have been trying to detect them using two large laser instruments in the United States, known together as the Laser Interferometer Gravitational-Wave Observatory (LIGO), as well as another in Italy.

The twin LIGO installations are located roughly 1,800 miles (3,000 km) apart in Livingston, Louisiana, and Hanford, Washington. Having two detectors is a way to sift out terrestrial rumblings, such as traffic and earthquakes, from the faint ripples of space itself.

The LIGO work is funded by the National Science Foundation, an independent agency of the U.S. government.

All the current knowledge about the universe comes from electromagnetic waves like radio waves, visible light, infrared light, X-rays and gamma rays. But a lot of information remains hidden because such waves get scattered as they traverse the cosmos. That would not be the case with gravitational waves, making them an enticing potential source of new information.

Two types of very massive and dense celestial objects, neutron stars and black holes, have proven tough to study but could offer ideal subjects if observations of gravitational waves are possible.

"People don't really know what's going on inside neutron stars," Allen said of these objects that weigh about 50 percent more than the sun but are extremely compact, only about the size of a city.

"It gives us a detailed picture of what's happening inside or around the object that's producing the waves. So, for example, if two black holes orbit each other, we can't see it any way other than gravitational waves because black holes don't emit any light, radio waves, X-rays or anything. The only way to see that is through their gravitational waves," Allen said.

"So one cool thing is one day we'll be able to see what the universe looked like in very early times using gravitational waves. That's what actually got me interested in the field 25 years ago," Allen said.
Last Update: Feb 11, 2016 6:08 pm
RELATED TOPICS