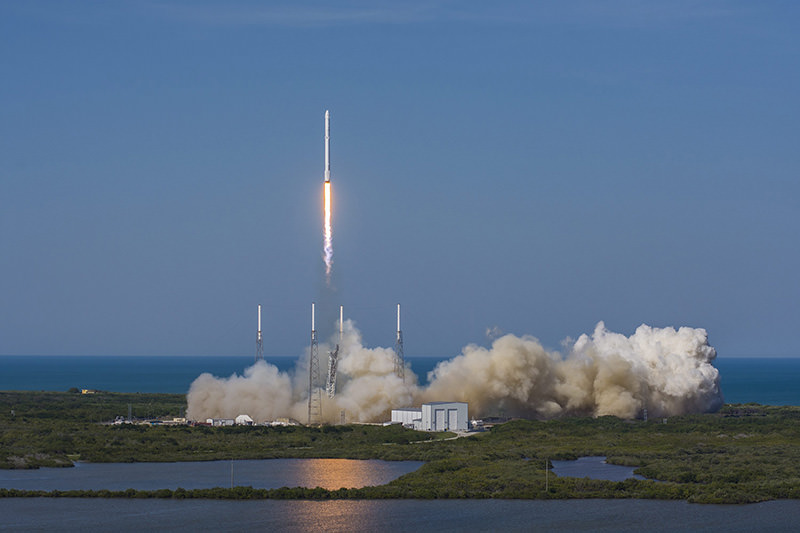 "We show load is safe, and it looks like we've caught a Dragon," said Peake.

Not since 2011, during the final flight of the space shuttle Discovery, have there been six vehicles parked at the ISS at the same time, NASA said.

Included in the Dragon's cargo is an expandable room that will be temporarily attached to the orbiting outpost.

Known as the Bigelow Expandable Activity Module (BEAM), the habitat is not scheduled for use until the end of May, but will stay at the ISS for two years so astronauts can test how it stands up to space debris and solar radiation.

The module can expand to about 10 feet (three meters) in diameter by 13 feet (four meters) long.

Astronauts plan to enter the room "for a few hours several times a year to retrieve sensor data and assess conditions," NASA said.

The cargo also contains Chinese cabbage seeds which astronauts will grow in space, and lab mice that will test whether certain drugs can help prevent muscle and bone loss in microgravity.

SpaceX's Dragon is currently the only spaceship capable of returning cargo to Earth.

It is expected to splash down in the Pacific Ocean on May 11, carrying science experiments including biological samples from astronaut Scott Kelly's one-year mission which ended in March.

The Dragon blasted off on Friday from Cape Canaveral, Florida, atop a Falcon 9 rocket.

Minutes after launch, the first stage portion of the Falcon 9 rocket successfully landed on a drone ship in the Atlantic Ocean for the first time.

The feat was hailed as a big step forward for SpaceX CEO Elon Musk's mission to make rockets as reusable as airplanes, an innovation that he says will bring down the cost of spaceflight.

Currently, sophisticated rocket parts costing tens of millions of dollars are jettisoned into the sea after launch.

Blue Origin, headed by Amazon founder Jeff Bezos, has also managed to land its rockets on solid ground after launch, but these flights have been suborbital and did not fly to the same heights -- or travel as fast -- as SpaceX's Falcon 9.

Musk said about half of the time, the Falcon 9 rocket will need to return to the ocean, so perfecting the technique of touching down on a floating platform is important.

US President Barack Obama congratulated SpaceX for landing its rocket at sea.

"It's because of innovators like you & NASA that America continues to lead in space exploration," Obama said on Twitter.