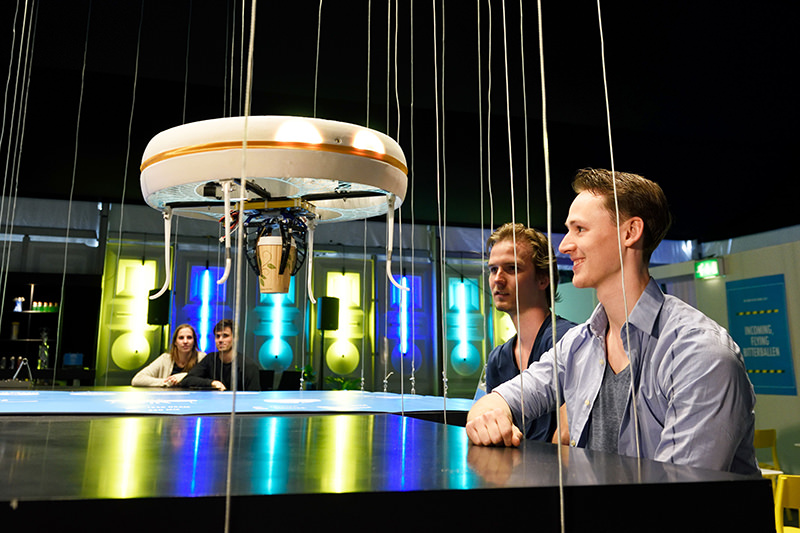 Would you like a drone with your cocktail? The world's first cafe using the tiny domestic unmanned aircraft as servers has opened in a Dutch university.

The pop-up drone cafe will be serving up all weekend as part of celebrations for the "Dream and Dare" festival marking the 60th anniversary of the Eindhoven University of Technology.

The 20 students behind the project, who spent nine months developing and building the autonomous drone, aim to show how such small inside craft could become an essential part of modern daily life.

"It has potential as a useful tool for human kind. We see it as the next mobile phone. You choose and you programme it like you want," student and project leader Tessie Hartjes told AFP.

The drone, nicknamed Blue Jay, which resembles a small white flying saucer with a luminescent strip for eyes, flies to a table and hovers as it takes a client's order, who points to the list to signal what they would like.

"The blue eyes of the first drone load" up by scanning the list to register the order, said Hartjes.

"Once it's fully loaded, then the order is ready. And another one comes with the order in a cup in the grip."

The cafe is offering four different alcoholic and non-alcoholic cocktails, which are either bright blue or green -- the same colour as the drone's "eyes."

The drinks are picked up and carried by a set of pinchers underneath the drone, in a bid to show that these aerial machines could be used to carry out delicate missions such as delivering medicines or even helping to track down burglars.

Each drone has cost about 2,000 euros to build, in a project funded by the university which the students say aims "to give a glimpse of the future".

Thanks to sensors and a long battery life they can fly inside buildings and navigate crowded interiors, unlike other drones, which rely on a GPS system.

"The Blue Jay is an intelligent bird that lives in complex, social environments," the students say in a video presenting their work.

They believe the drone's applications could be endless: as extinguishers to put out fires, alarm systems to warn of intruders or mini-servants which would respond to commands such as "fetch me an apple."

"We believe that one day, domestic drones will be a part of society. One day, a drone could be a friend," says one of the students in the video presentation.