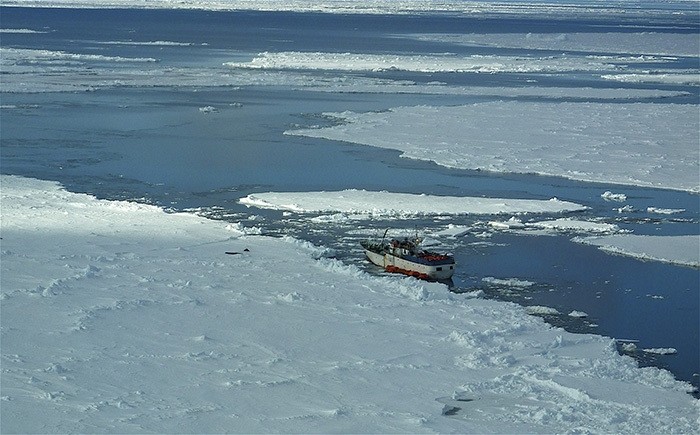 The Russian fishing boat Sparta lies stranded in Ross Bay in Antarctica about 2,000 nautical miles (3,700 km) southeast of New Zealand in this handout picture taken on December 17, 2011. (Reuters Photo)
by Compiled from Wire Services Jul 01, 2016 12:00 am

The massive hole in the ozone layer above Antarctica shows signs of healing after three decades of concerted action by world governments, scientists said Thursday.

The ozone layer is a crucial part of the atmosphere that blocks harmful solar radiation from reaching the Earth's surface. Without it, scientists believe skin cancer rates in animals and humans would skyrocket.

A massive hole in the ozone above the frozen continent of Antarctica was discovered in 1985, which researchers quickly attributed to the use chlorofluorocarbons (CFCs), a type of chemical used in refrigerators and aerosol sprays.

The gaping hole became a powerful symbol of mankind's ability to affect the environment, and in 1987, 196 nations signed a pledge to limit the production of CFCs in an agreement known as the Montreal Protocol.

Today, however, researchers claim the hole has shrunk significantly -- 4 million square kilometers (1.5 million square miles) since 2000, when ozone depletion was at peak levels. This contraction is roughly half the size of the contiguous United States.

It appears that these "first fingerprints of healing" of the Antarctic ozone layer, as the scientists describe it, were caused by the Montreal Protocol.

Researchers working from the Massachusetts Institute of Technology (MIT) led an international team, which was funded by the National Science Foundation and the U.S. Energy Department. The team's results were published Thursday in the journal Science.

"We can now be confident that the things we've done have put the planet on a path to heal," said lead author Susan Solomon of MIT, who was instrumental in uncovering the causes of the ozone hole 30 years ago.

"Which is pretty good for us, isn't it? Aren't we amazing humans, that we did something that created a situation that we decided collectively, as a world, 'Let's get rid of these molecules'? We got rid of them, and now we're seeing the planet respond," she added.

Co-author Anja Schmidt, an academic research fellow in volcanic impacts at the University of Leeds, agreed, describing the Montreal Protocol as "a true success story that provided a solution to a global environmental issue."

"Such eruptions are a sporadic source of tiny airborne particles that provide the necessary chemical conditions for the chlorine from CFCs introduced to the atmosphere to react efficiently with ozone in the atmosphere above Antarctica."