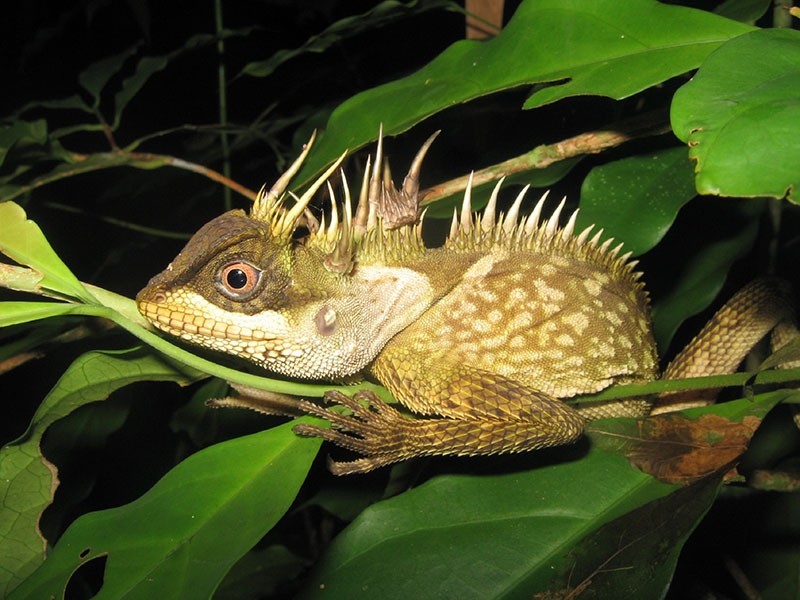 This handout from the WWF taken on September 15, 2014 and released on December 19, 2016 shows a new species of lizard called acanthosaura phuketensis in Phuket. (AFP Photo)
by Compiled from Wire Services Dec 19, 2016 12:00 am

The report, titled Species Oddity, documents the work of hundreds of scientists who discovered nine amphibians, 11 fish, 14 reptiles, 126 plants and three mammals in Cambodia, Laos, Myanmar, Thailand and Vietnam in 2015.

Among the most eye-catching are parafimbrios lao, a snake found in the limestone karsts of northern Laos whose scales reflect rainbow-like colours around its head.

On the Thai tourist island of Phuket, which has seen huge development in recent decades, scientists found a lizard (acanthosaura phuketensis) with a fearsome-looking ridge of horns down its head and back.

And in the country's northern Chiang Rai province researchers found a newt (tylototriton anguliceps) with dazzling red and black markings that they likened to a Klingon's head from the Star Trek franchise.

In Cambodia and Vietnam, a new frog species that could fit on a finger tip was also discovered.

Asia's Greater Mekong region is home to some of the world's most endangered species. Rare or endangered animal parts, including tiger bones and rhino horns, are seen as collector's items by some and are often used in traditional medicine.

"The Greater Mekong region is a magnet for the world's conservation scientists because of the incredible diversity of species that continue to be discovered here," Jimmy Borah, from WWF's Greater Mekong team said.

However, the region is also under intense pressure from dam and road building as well as a thriving illegal wildlife trade, much of it centered around the lawless Golden Triangle area where the latter three meet.

"Many collectors are willing to pay thousands of dollars or more for the rarest, most unique and most endangered species," Borah said.

The total new species of plants, birds, mammals reptiles fish and amphibians discovered in the region stands at 2,409 since WWF began compiling new species reports in 1997.