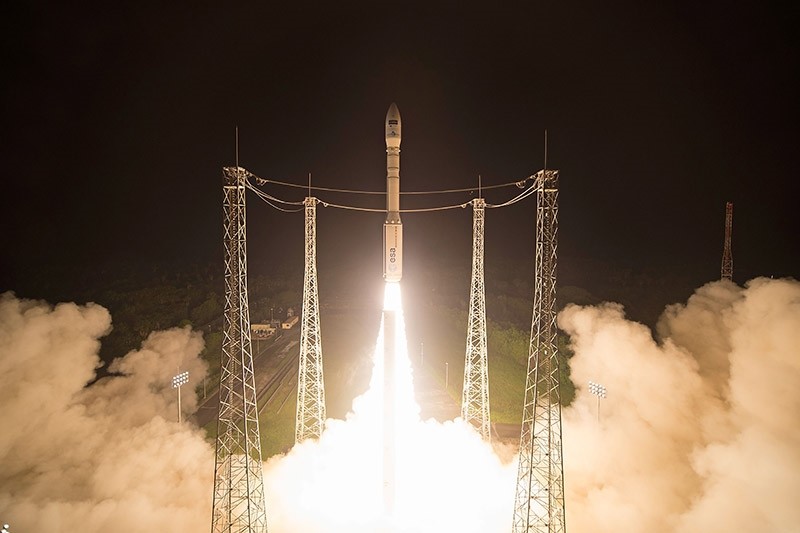 This handout picture taken and released by ESA shows a Vega launcher carrying the Sentinel-2B satellite lifting off from Europeu2019s Spaceport in Kourou, French Guiana on March 7, 2017. (AFP Photo)
by Compiled from Wire Services Mar 07, 2017 12:00 am

Europe launched the fifth of its Sentinel Earth observation satellites on Monday as part of its multi-billion-euro Copernicus program to provide speedy images of land, oceans and waterways.

The Sentinel-2B satellite, part of a system of satellites that is to monitor Earth, blasted off on board a Vega rocket from Europe's spaceport in French Guiana at 8:49 p.m. EST (0149 GMT on Tuesday).

It will join its twin Sentinel-2A, which has been in orbit since 2015, to take high-resolution, color and infrared images for a wide array of environmental initiatives, including crop forecasting and monitoring natural disasters.

The two satellites will orbit 488 miles (786 km) above Earth, on opposite sides of the planet.

Together, they will be able to cover all of Earth's land surfaces, large islands, inland and coastal waterways every five days, providing more up-to-date images and at higher resolution than have been available.

"With this launch we are taking another step toward advancing the Copernicus program, which is the most sophisticated Earth observation system in the world," European Space Agency (ESA)director general Jan Woerner said in a statement.

Two more satellites are to follow in the coming months.

"Each Sentinel-2 satellite carries an innovative high-resolution multispectral camera with 13 spectral bands for a new perspective of land and vegetation," the agency said.

Future satellites will focus on ocean data and Earth's atmosphere.

Copernicus, a program of the ESA and European Commission, is named for the 16th-century Polish astronomer who determined that the Earth orbited the Sun, and not the other way round, as convention had it at the time.