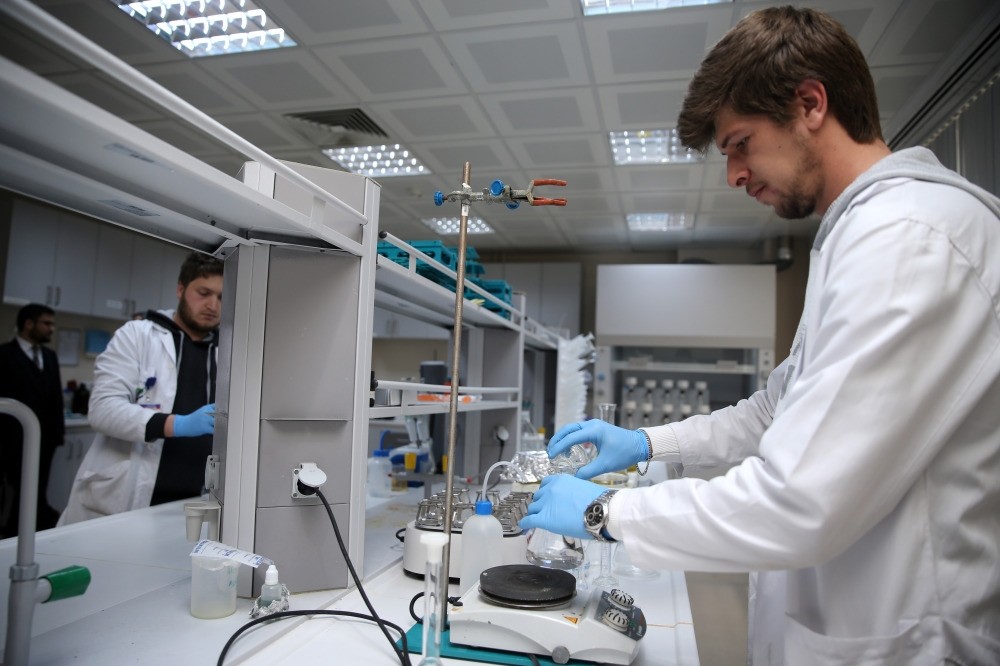 by Anadolu Agency Mar 21, 2017 12:00 am
A team of academics at Düzce University's Scientific and Technological Research Application and Research Center (DÜBIT) have discovered that molecules in boron, a chemical element which has huge reserves in Turkey, can prevent metal corrosion.

The DÜBIT team, backed by The Scientific and Technological Research Council of Turkey (TÜBİTAK) for two years on the project , have recently obtained patent for the chemical solution they developed and is fast moving on to the production phase.

Project Manager and chairman of the Department of Chemistry at Düzce University, Professor Dr. Halil İbrahim Uğraş, said they launched the project concerning boron four years ago, with the idea that boron had more potential and ought to be given more value.

Noting that he was working on some components of the boron, Uğraş, who is also the director of DÜBİT, said, "We wanted to try out some of its components in practice. During these experiments, we thought that boron could have anticorrosive properties after observing some of its behaviors. When we were conducting this tests, we applied for TÜBİTAK's support." TÜBİTAK, who found the project worth supporting, backed it financially for two years.

Uğraş said, in 2014, the project was accepted for funding. It was then launched in 2015 and has now reached its final stages.

"With our team, we found 49 combined synthesis of boron. We have made this contribution to the literature and the world. When we looked at their application studies, we saw that the anticorrosive properties were very high," Uğraş said, highlighting that rusting is an expected but undesirable feature in all cases where metal is used.

Singling out rust as one of the main reasons behind shortened lifespan of devices and materials, Uğraş said, "In our research on boron, we have proven that the molecules exhibit anticorrosive properties with a ratio of over 90 percent, for up to 20-30 years."

Underlining that the entire anticorrosive protection was developed using domestic resources, Uğraş said, they have filed for four national and one international patent applications regarding their work that involved a team of eight.

He also stated that they have continued working on the project, which was awarded a silver medal at the ISIF'17. Their next target was making it ready for practical use in the country.

Pointing out that the finished product would be used primarily in the industrial sector, Uğraş said, "Our product, which will prevent rust formation, is not suitable for direct home use at this stage. In the scope of the project, we have rust-preventive and anticorrosive formulations as by-products."

However, with research and development works in progress, the product will be further developed, he said.

Claiming that their product was at least 15 percent cheaper in the first tests, as it is fully indigenous, Uğraş said, "We are thinking about providing services to local industries at a reduced cost. Our product will be marketed domestically."
RELATED TOPICS