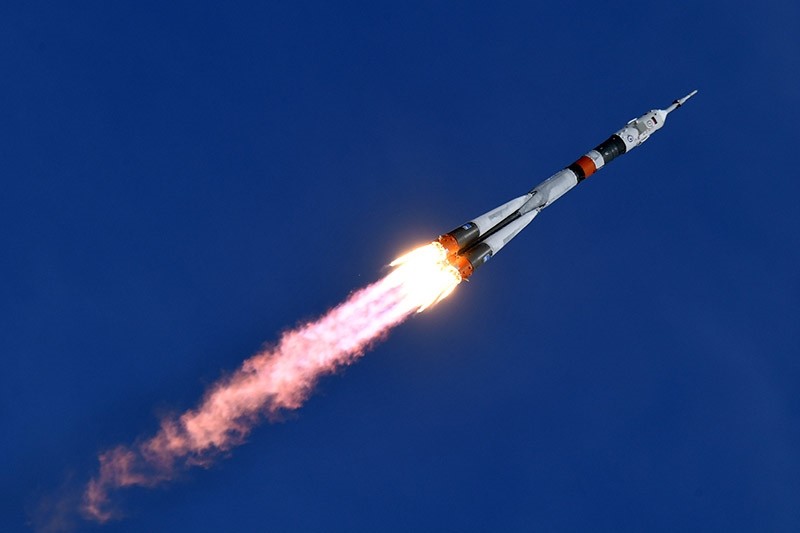 Russia's Soyuz MS-04 spacecraft carrying Russian cosmonaut Fyodor Yurchikhin and NASA astronaut Jack David Fischer blasts off to the ISS from the launch pad at the Russian-leased Baikonur cosmodrome on April 20, 2017. (AFP Photo)
by Compiled from Wire Services Apr 20, 2017 12:00 am

Russian cosmonaut Fyodor Yurchikhin and NASA's Jack Fischer, a first-time astronaut, blasted off for the International Space Station on Thursday from a Russian-run launch facility in Kazakhstan.

The duo was expected to reach the station in their Russian-designed Soyuz MS-04 spacecraft about six hours after the launch.

They reached orbit about nine minutes later, a moment illustrated when a small white stuffed dog hanging from a string in the capsule began to float.

Two days later, a Cygnus cargo ship is scheduled to arrive at the space station, particularly to supply the facility's laboratory.

That trio has been in space for more than 150 days on its current mission and is scheduled to return to Earth in June.

The two American astronauts are scheduled to speak with President Donald Trump on Monday. On that day, Whitson, the first woman to command the International Space Station, will have spent 535 days in space, more time than any other American astronaut. Jeffrey Williams currently holds the record.

At 57, Whitson also is the oldest woman in space. She returns to Earth in September.

Fischer and Yurchikhin, making his fifth space flight, will spend more than four months aboard the orbiting station before also returning to Earth in September.